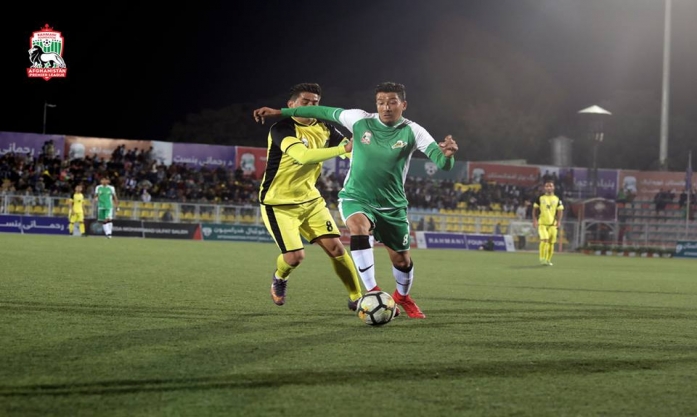 Rustamove’s men, the title holders of last year and representatives of capital zone, played in their third and final group stage match against De Spinghar Bazan. The team defeated its rival with 3 - 1 score and by accumulating 3 more points, qualified for the semi-finals with the highest points from group "A". The interesting game was kicked off today, 15 October 2018, at 06:00 pm, in the Football federation of Afghanistan.

Both rivals had previously fought with the other two teams in group “A”, Abasin and Mawjha, each one respectively owning 3 and 1 points. Shaheen Played against Mawjha in the inauguration match, and defeated the team with 2 – 0, whilst De Spinghar Bazan faced the team on their second match, the seventh match of APL 2018 Rahmani foundation, which ended with a 1 – 1 draw. Bazan battled against De Abasin Sape on their first match, second group stage match but Shaheen faced the team on their second game, fifth group stage match. The mentioned teams, Abasin and Mawjha will face each other on 17th October.

De Spinghar Bazan was destined to be dribbled from the very moment the game was kicked off, by Shaheen. The initial weak strikes were all made by their powerful rivals, whereas, Bazan didn’t lose much of the counter attack opportunities, but did not utterly threaten their opponents either.

For all the rest of first 45 minutes, both teams had equal possession of the ground and carried on a close combat, but none could score any goal, however, Shaheen appeared more dominant and their rivals had to panic throughout the time, and only utilized the counter attacks to put some impression. The first half ended with 0 – 0 result.

De Spinghar Bazan kicked off the second half, apparently with more self-confidence and probably based on a scheme to situate attacks more than being concerned about their defense line. However, with their experienced players, Shaheen Asmayee was more even-tempered and stayed in ambush for the perfect opportunity and right moment.

Sayed Naseer Hussaini finally put his team on lead with a perfect counter attack situated by his teammates on the 59th minute of the game.

But, De Spinghar Bazan was not up for accepting this fate, not that soon, and 15 minutes later, Hedayatullah Quraishi scored a goal using a free-kick, through a very powerful, yet precise shot towards Kawash Haidari’s goal.

With this equalizer goal, Shaheen turned very aggressive and executed attacks over and over until the last minutes of the game, until, the team earned a penalty shot. Anwar Akbar shot the penalty and scored the second goal for his team, but long after this, during the extra minutes of the game, the team still had enough energy & enthusiasm to keep trying over their opponent’s goal and the efforts paid off on the 94th minute, as Hashmatullah Barakzai scored the 3rd and final goal.

The match ended with 3 – 1 result, Shaheen Asmayee accumulated 3 more points and now, on the very top of the group “A”, the perfect team once again escalated to the semi-finals, whilst, this was the end of line for De Spinghar Bazan in RFAPL 2018.

Both teams had 50/50 possession of the game. Sher Ali Lali from De Spinghar Bazan received a red card on the 92nd minute, and two of his team mates, Wakil Kamalpoori and Hedayatullah Qurayshi, along with Atiqullah Sultani and Murtaza Rezayi from Shaheen Asmayee received yellow cards.