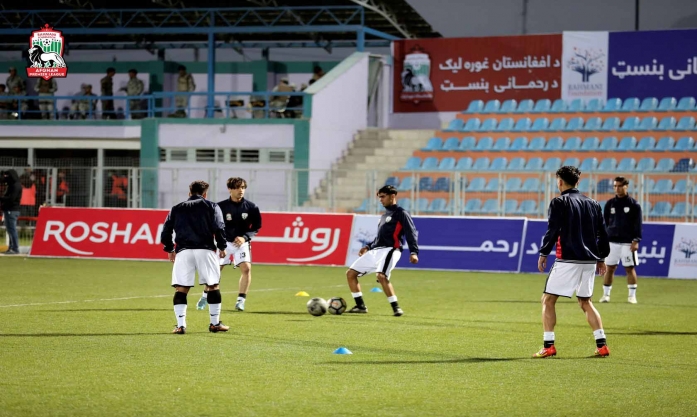 The lively match of 2017 APL champions, Shaheen Asmayee and De Abasin Sape was kicked-off today October 11, 2018 in the Afghanistan Football Federation (AFF) stadium. This was the 5th match of the 2018 Afghanistan Premier League Rahmani Foundation and 3rd match of the group “A”. After 90 minutes battle, Shaheen thrashed 1 – 0 their opponent.

Both teams had won their first group stage matches and tried to make their job easy for qualifying into the semi-finals. De Abasin failed to grab lead in the first-half despite few chances. They made good run into the right channel but failed to capitalize any.

De Abasin Sape kicked off the match with a defense attitude while Shaheen kept breaking their defense line with constant attacks. The men in white made a serious counter attack in 35th minute, but it was Kawash Haidari (Shaheen’s Goalkeeper) who saved his team and took the ball into control.

On 44th minute of the game, Shaheen's players situated an attack from the right side of the pitch on their opponent’s goal and Mustafa Afshar took their team to a 1-0 lead.

De Abasin Sape was not able to create many meaningful openings in the first half. Their very few attempts were dragged off target by Shaheen’s defense line. The referee whistled for the half time with a 1-0 score for Shaheen.

Shaheen started the second half aggressively and kept threatening Abasin’s goal, but some great interceptions by men in white prevented them to get the ball into the net.

Abasin continued having their dangerous counter attacks, yet again Kawash Haidari kept the Shaheen’s door closed and defused their efforts. The referee whistled for the full time and Shaheen made their job easy getting into semi-finals.

The game statistics show 52% match possession for Shaheen Asmayee. Kawash Haidari of Shaheen received the Man of the Match Award.

Tomorrow, October 12, 2018, De Maiwand Atalan will hit the ground against Toofan Harirod at 5:30 pm in the AFF stadium.