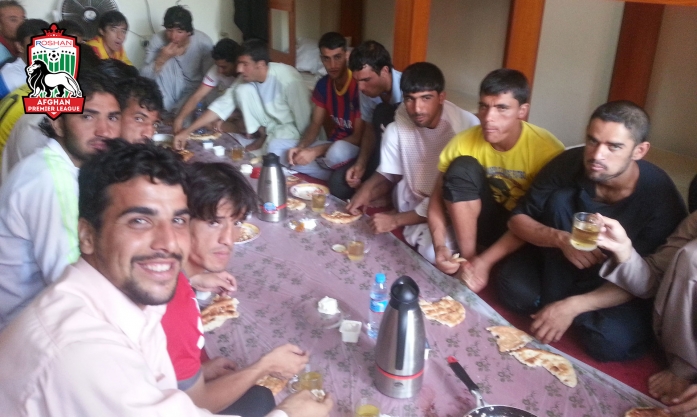 All eighteen players of the RAPL’s De Maiwand Atalan—nine from Kandahar, six from Helmand, three from Nimruz—plus the coaching staff and manager, sat around a plastic tablecloth. Eggs mixed aromatically with peppers, onions, tomatoes, and spices were delivered in piping hot frying pans. Bread and cream cheese were served on the side, with green tea on hand to wash it all down.

Breakfast was dispatched with impressive speed, and everyone chipped in to collect the empty plates and cups and clear the tablecloth. Then, defender Mirwais Nimruzi(#13) unburied a set of loudspeakers from a pile of football clothes and cranked up the music. It was a playlist of Pashto songs like what you might hear at a Southern wedding.

It must have been something in the eggs. Before long, the whole room was clapping and singing, urging teammate after teammate to take the floor and dance a number. The young man with the best stage presence turned out to be defender Abdul Qayoom Himat (#5), who proved that good footwork begins on the football pitch but doesn’t end there.

De Maiwand Atalan seem to have struck a good balance between a laid back attitude in the RAPL players’ house—where personnel from all eight RAPL teams live and where the scene above took place—and a serious approach to training, which begins every morning at 6AM. After all, every player on the team has either sacrificed a semester of school or all their job’s vacation days (and then some) to participate in the RAPL. Starting forward Sayed Baqir Agha (#11) explains, “I have some problems with my job in Helmand because I came to Kabul for the RAPL. But I want to help De Maiwand Atalan win a title. Second, I want to be identified for Afghanistan’s National Team.”

De Maiwand Atalan lost their first match of the 2013 RAPL season last Friday, falling 2-0 to the Southeast’s De Abasin Sape, despite outshooting their opponent by a factor of three. The disappointment among the players was apparent as they watched the match replay on TOLO the following morning.

Another loss against central Afghanistan’s Oqaban Hindukosh at 4PM this Friday at the AFF Stadium would almost certainly end their chances of making the playoffs.

“Our approach to this week has been to train hard and to make the necessary tactical and personnel adjustments,” said Head Coach Mukhtar Raufi. “Today, for example, we didn’t touch the ball.  Just conditioning to get the team ready.” He acknowledges that Oqaban Hindukosh, coached by Elyas Manochehr, will be a strong, organized side. Still, he is confident in his team’s chances.

Plus, his players are used to playing in important games in front of big crowds back home. The main football stadium in Kandahar draws as many as 20,000 fans to some matches—when the Herat provincial team plays the Kandahar team, for example. Football in Helmand and Nimruz also boast high popularity. Players from all three regions assert that football is far more popular than cricket in their hometowns.

Tune into TOLO TV, Lemar TV, Radio Arman, Radio Arakozia, or YouTube live streaming at 4PM this Friday to watch how the charismatic players from southern Afghanistan fare against central Afghanistan’s Oqaban Hindukosh. But first, check out Thursday’s game, also at 4PM, between the North’s Simorgh Alborz and the East’s De Spinghar Bazan.