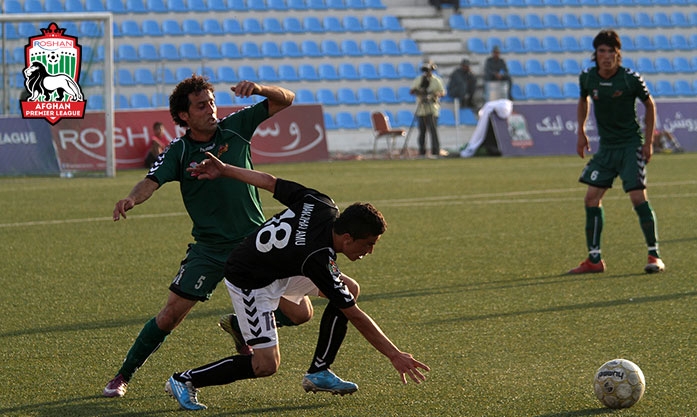 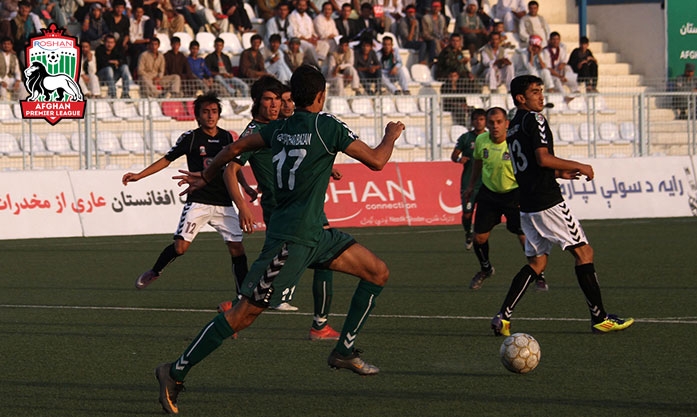 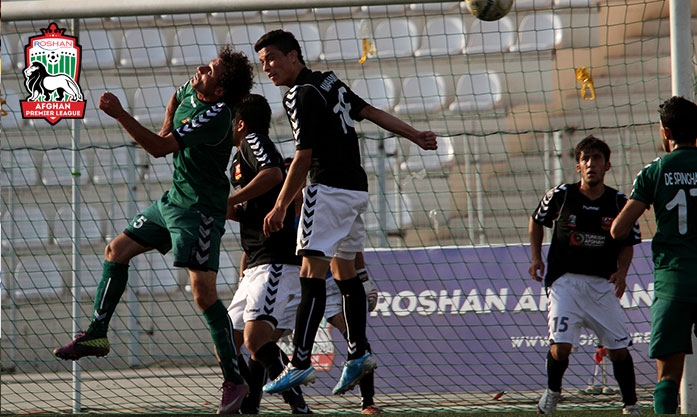 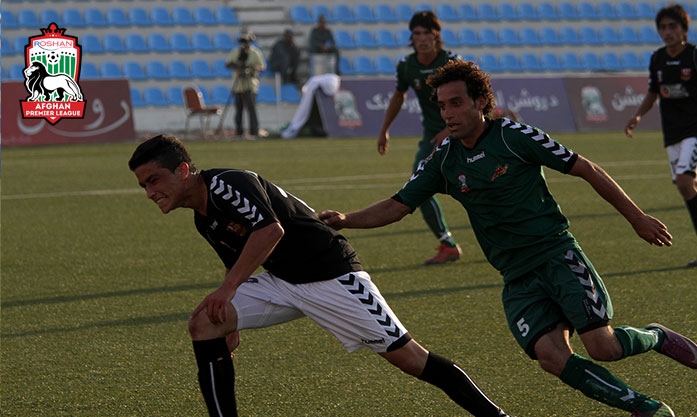 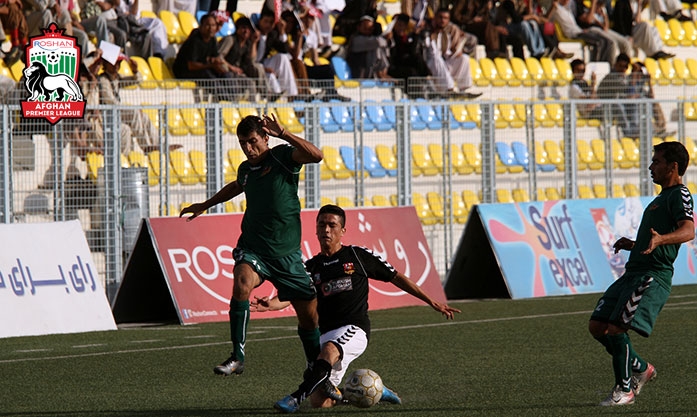 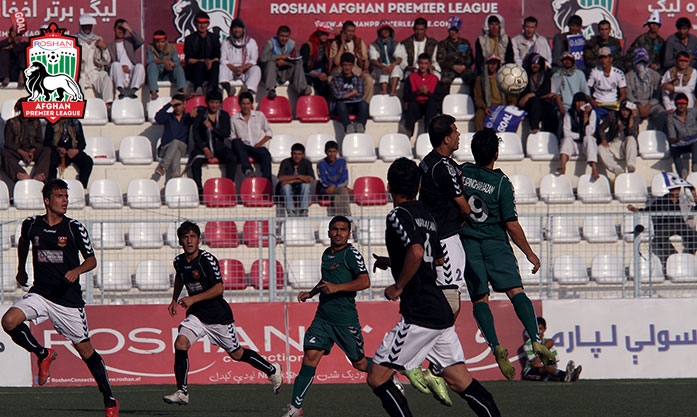 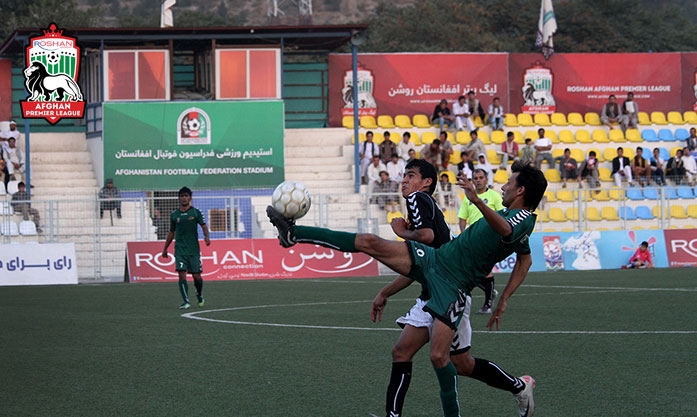 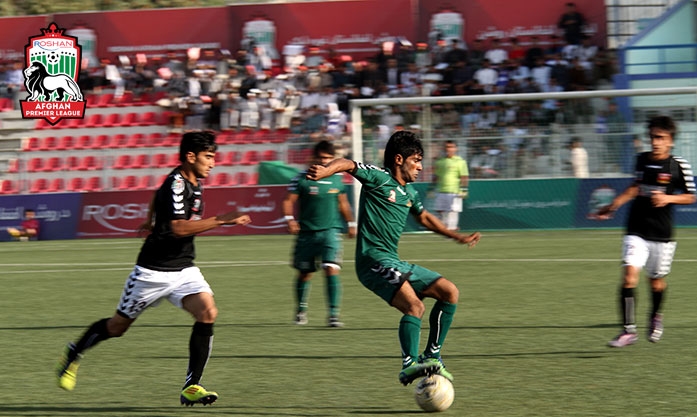 The last weekend of the RAPL regular season is upon us.  Today’s competitors, the Northeast’s Mawjhai Amu and the East’s De Spinghar Bazan, are the two teams from Group A who have been left out of the semifinals party.  Both teams are yet to win a game, and a win today still would not get them enough points to advance to the next round.

But there is a lot of pride on the line.  Mawjhai Amu is judged by players on other teams to be one of the most dangerous squads in the league.  They will want to prove those claims today before heading home.  De Spinghar Bazan, on the other hand, lost each of their first two games by a 5-0 tally.  Another such loss would be a huge embarrassment.

Perhaps suffering from a lack of crowd support, neither side looked inspired in the attacking third of the field for the majority of the first half.  Very few good chances were created, and when they were, they were not capitalized on.  De Spinghar Bazan right midfielder Ziyarmal (#17) found himself one-on-one with goalkeeper Abdul SaboorAslami (#21) in the 10th minute, but knocked his shot well over a charging Aslami and the crossbar.  Aslami was forced into action in the 27th minute as well, parrying a strong shot from midfielder FaheemAfkar (#7) to his right and out for a corner kick.

Although Mawjhai Amu had the better of the possession, they didn’t start threatening De Spinghar Bazan goalkeeper Hakeem Momand’s (#1) goal until late in the half.  They made a breakthrough in the 45th minute when a cross from the left flank was cleared carelessly to the top of the box by the De Spinghar Bazan defense.  Eyes wide, Mawjhai Amu midfielder Abdul Jabar Arab (#17) ran onto the ball and struck a zinger from 20 meters off the left post and into the goal.

The goal seemed to wake up both teams for the start of the second half.Mawjhai Amu pressed more ambitiously forward, but it was De Spinghar Bazan who struck first.  In the 54th minute, a De Spinghar Bazan midfielder let a pass run through his legs.  This “dummy” caused the Mawjhai Amu defense to hesitate, and it was forward Abdul Hadi Safi (#2) who was the first to the ball.  His one touch sent the ball through Aslami’s legs and into the net, tying the game at 1-1.

Just over ten minutes later, Safi’s fellow forward Waid Ahmad (#11) ran down a through pass and found himself one-on-one with Aslami.  Ahmad took one touch, looked up at the keeper, and then managed to sneak a shot past Aslami on his near post, where there didn’t seem to be much room.  Ahmad was ecstatic, having earned his team their first lead of the season.

Ahmad’s goal proved to be the game winner.  Despite sending an extra man into the attack for the last 20 minutes of the game, Mawjhai Amu were not able to net a second.  Mawjhai Amu forward AtiqulladShairzad (#2) missed a chip over the keeper in the 70th minute, and midfielder Kiyanoosh (#8) send a half-volley soaring over the net in the 83rd.  Otherwise, the De Spinghar Bazan defense held strong and managed to achieve their first win of the 2013 RAPL.

Of course, the win does not send De Spinghar Bazan to the semifinals, but it is a nice way to cap off an otherwise disappointing year for them.  Mawjhai Amu, on the other hand, will be bitter about today’s loss, an anticlimactic way for one of the best teams in the RAPL to exit.