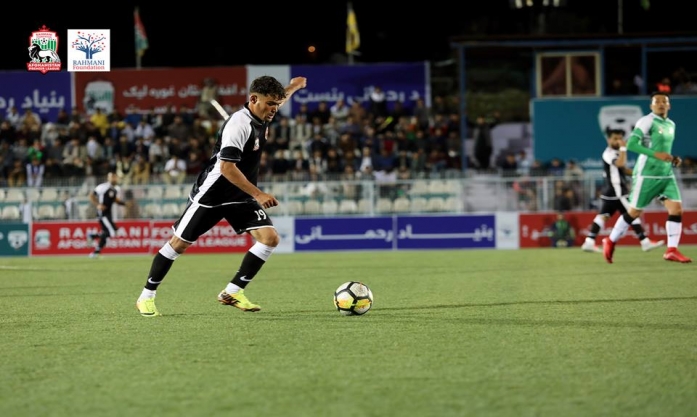 A tough game for Mawjhai Amu

De Maiwand Atalan, with 3 points only in the group “B” prior to their third gamelast night game, won the ticket for the semi-finals through defeating its rival, Simorgh Alborz, the representative of north zone. With this, only two teams are left in the group “B”, Toofan with 6 pints and Oqaban with no pints and 4 goals difference, to compete tomorrow, in the last group stage match.

But from group “A”, another decisive game will be played today, 17th October 2018, at 05:30 pm in the Football federation of Afghanistan. The contest is between De Abasin Sape, second team in their respective group, enjoying only three points, over a 1 – 0 loss against Shaheen Asmayee which has escalated to the semi-finals once again as the first team with 9 points, and a 3 – 2 victory over De Spinghar Bazan. Whilst, Mawjhai Amu, with 2 goals difference and only one point because of 1 draw against De Spinghar Bazan which is now annihilated by Shaheen Asmayee, and a 2 – 0 loss against the mentioned team, is the last team in its respective group.

Ghulam Farooq Asil’s men were unfortunate in both their games, primarily due to standing in the group “A” alongside a power rival, Shaheen Asmayee, as a result of the draw show, and were defeated in the opening match of APL 2018 Rahmani foundation, and further on, the team which got defeated by De Abasin Sape, De Spinghar Bazan, reached a 1 – 1 draw conclusion in the 7th group stage match against Mawjhai Amu.

With some fresh players from the under 19, under 21 and 23 of the national team, De Abasin Sape on the other hand is considered a powerful team in the APL 2018 Rahmani foundation. So far, the team has played very well and based on the facts, they are expected to escalate to the semi-finals.

“Our team is fully prepared, we have played well so far, all the spectators witnessed our games, all the people saw. De Abasin Sape had no achievements in the past years but it had wins in this season, we played well against Shaheen Asmayee too and even though we lost the game with 1 – 0 result, it was due to not having sufficient time for resting after the former match. Right now, that we are to play against Mawjhay Amu, we are hundred percent prepared to succeed, but although we can escalate to the semi-finals with a draw as well as earning scores, we must play for the contentment of our fans.” Said the coach of De Abasin Sape, Mr. Elyas Manochehri. He added: “Nothing can be predicted, we are hopeful to get positive results.”