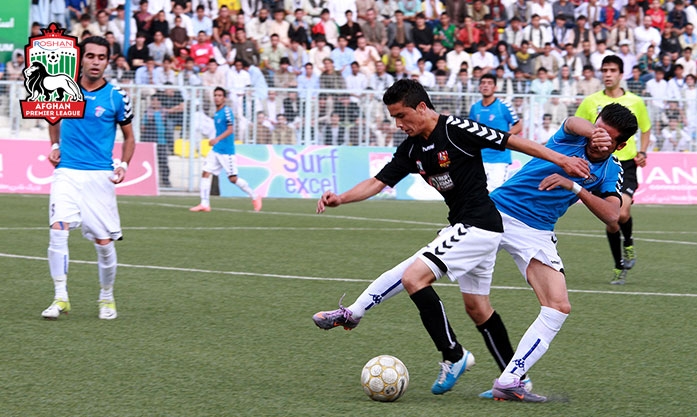 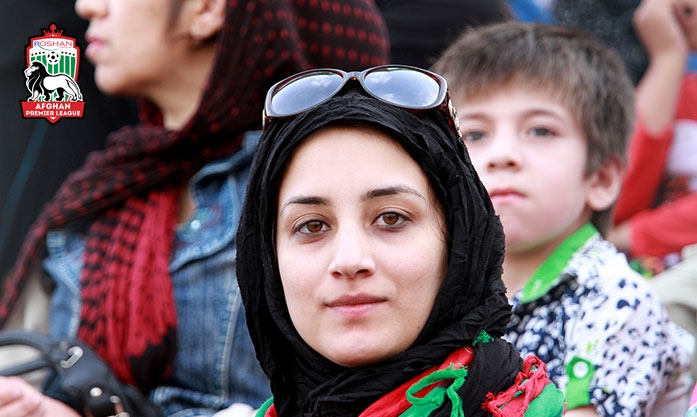 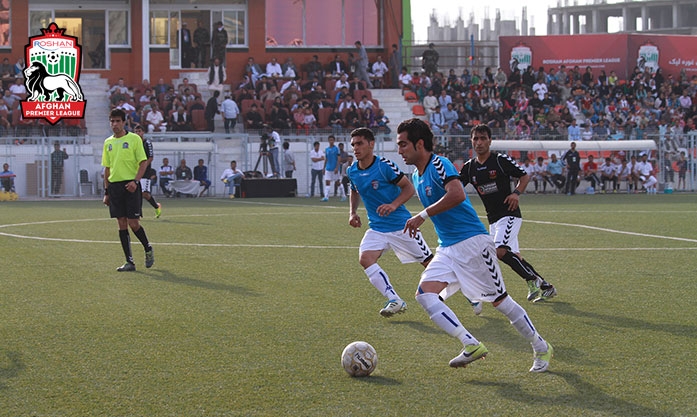 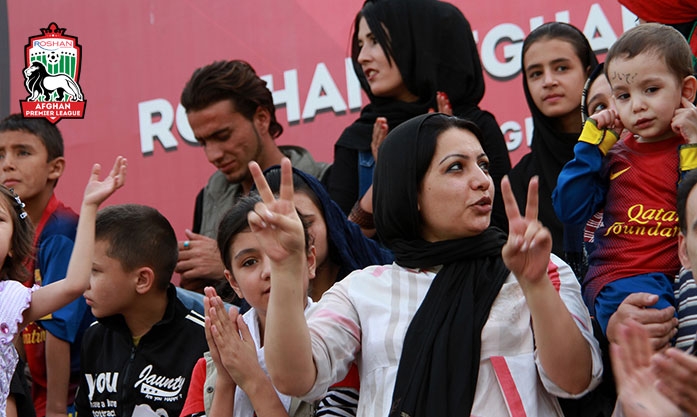 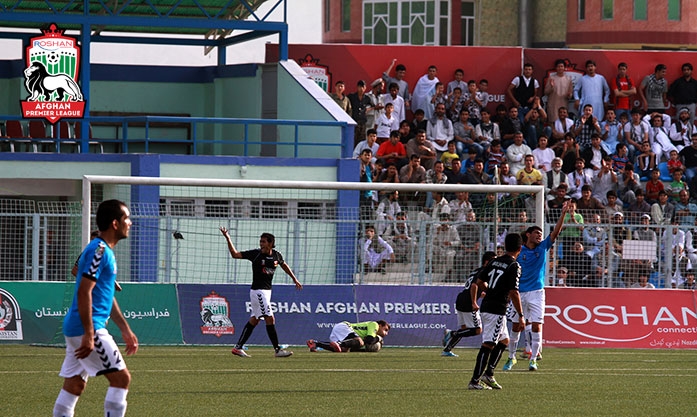 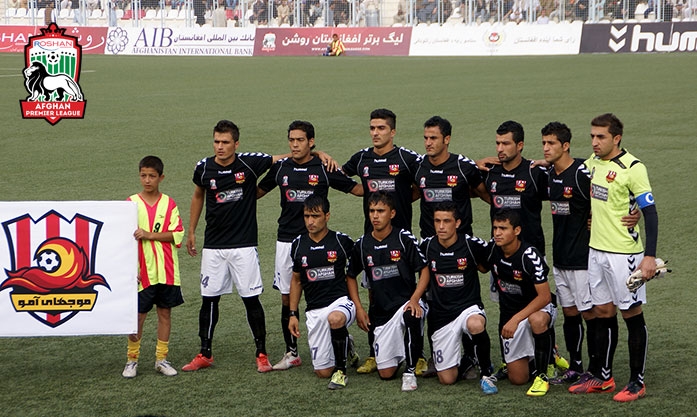 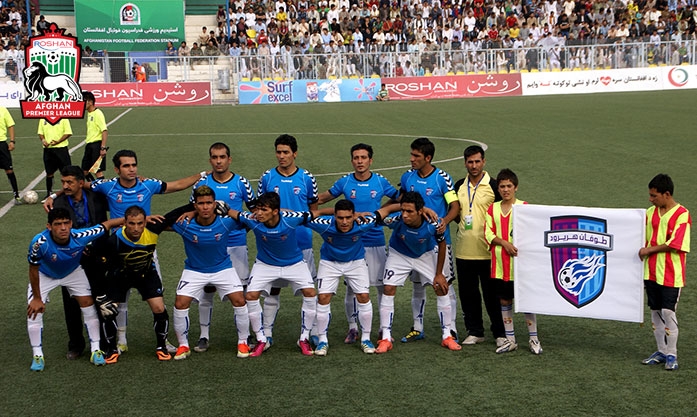 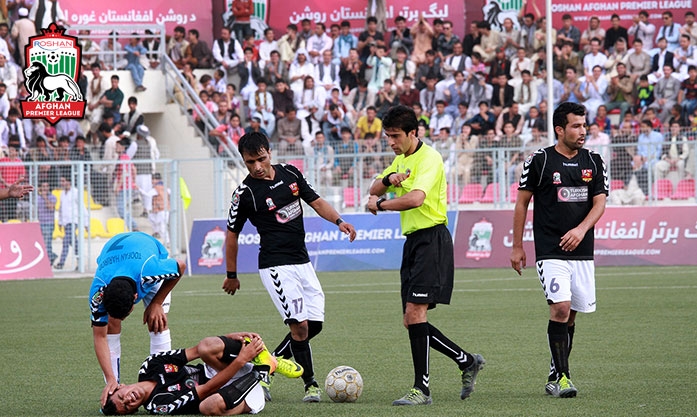 The second game of the RAPL weekend featured the Northeast’s Mawjhai Amu versus the West’s Toofan Harirod.  The stands were packed on account of Toofan Harirod having four players who featured prominently in the Afghanistan National Team’s victory in the SAFF Championship only two days ago: midfielders Maroof Mohammadi (#14) and Rafi Barakzai (#7), forward Hamidullah Karimi (#11), and defender Farzad Atayi (#4).

RAPL defending champions Toofan Harirod delivered a 5-0 thrashing to the East’s De Spinghar Bazan in their first match of the 2013 season, while Mawjhai Amu tied the North’s Simorgh Alborz 2-2.  Toofan Harirod was favored going into today’s contest, but Mawjhai Amu was not a side to be taken lightly.

It was Mawjhai Amu, in fact, who looked more dangerous in the opening minutes.  Toofan Harirod’s goalkeeper Yama Yahyazada (#21) gave up twomouthwatering rebounds off shots in the 9th and 18th minutes from Lal Badshah (#11) and QismatAhmadi (#18), respectively.  But no Mawjhai Amu attacker was able effectively to follow up the shots.

Then, in the 21st minute, Toofan Harirod’s right midfielder Ramiz Noorzai (#9) found space to feed a low driven cross across the six meter box.  Attacker Ghulamraza Yaqoobi (#17) made a decoy run past the ball, creating space for Karimi to collect the ball on the back post and knock it home.  The stands packed with Toofan Harirod supporters exploded in celebration.

ToofanHarriod slowly but surely gained control of possession for the rest of the half, and they entered half time looking comfortable with their one goal lead.

Spectators were in for a treat at halftime as the Afghanistan National Team—the 2013 SAFF Champions—paraded around the pitch to show their gratitude for the fans’ support.

The start of the second half was a back-and-forth affair as both sides threw men forward to look for a goal.  Mawjhai Amu were unlucky in the 56th minute when goalkeeper Hizbullah   Dashti(#1) was late reacting to a through ball played from the ToofanHarirod midfield and brought down Yaqoobi in the box as Yaqoobi took a touch away from goal.  The referee awarded a penalty kick, which Barakzai promptly tucked into the right side of the goal.

Mawjhai Amu’s midfield was impressive for the remainder of the second half.  They out-hustled the opposing midfield and were aggressive in pushing forward.  Unfortunately for them, the Toofan Harirod defense was well organized and physical, and they managed to shut down every Mawjhai Amu opportunity.  The ToofanHarirod defense even started the counterattack in the 82nd minute that ended with Karimi heading the ball home after his first shot ricocheted off Dashti.  The perfectly timed through pass to Karimi and his subsequent finish sealed a 3-0 victory for Toofan Harirod and a place in the 2013 RAPL semifinals.

You can watch the full match video below.