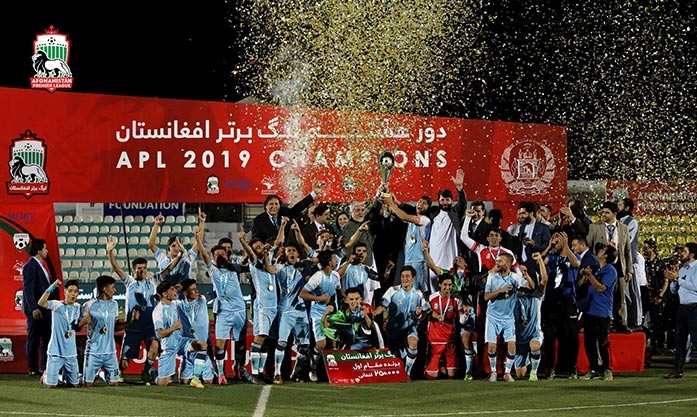 Toofan Harirod became the champion for the 2nd consecutive time

Today, 20th September 2019, at 05:00 pm, Afghanistan Football Federation hosted the final match of the APL season 8. Two finalists, representative of the west zone and the men in golden shirts from the capital went head to head in this thrilling match.

The game started in high excitement, and both sides entered the ground full of energy and motivation. As soon as the game was kicked off by Toofan Harirod, Shaheen Asmayee penetrated the network of their opponents and by properly intercepting their passes, the team carried the game with its usual striking attitude. However, Toofan Harirod returned the errand by fashioning very systematic counter attacks.

The players of both teams had a high spirit and played very well. The strikers, defendants and the overall coordination between the players was marvelous but despite all the breath-taking incidents throughout the first 45 minutes, the half ended with 0 – 0 result.

The second half started with dangerous attacks of Toofan Harirod on the opponent’s goal, but it was Kawash Haidari, Shaheen Asmayee’s goalkeeper who beautifully saved his goal and changed the opponent’s attacks into counter-attacks for his team.

Meanwhile, the time was running fast and both sides needed at least one goal to grab the superiority in the game. On the other hand, spectators were waiting for exciting goals for their favorite team.

The first half of the extra times stared full of excitement, spectators couldn’t hold it further, and finally, in a beautiful counter attack, in the 95’ of the match, Hatam Shirdil from Toofan Harirod scored the first goal which later came to be the winning goal for his team. Toofan leaded by 1-0.

Amanullah Sardari, Shaheen Asmayee’s talented defense received a red card due to a foul and hereon, Shaheen had to play with 10 men.

Shaheen Asmayee tried their best to compensate the loss and to get the game to penalty strokes, but they failed.

The thrilling final match came to an end for Toofan Harirod by 1-0.

Hatam Shirdil was awarded the man of the match title for his winning goal.