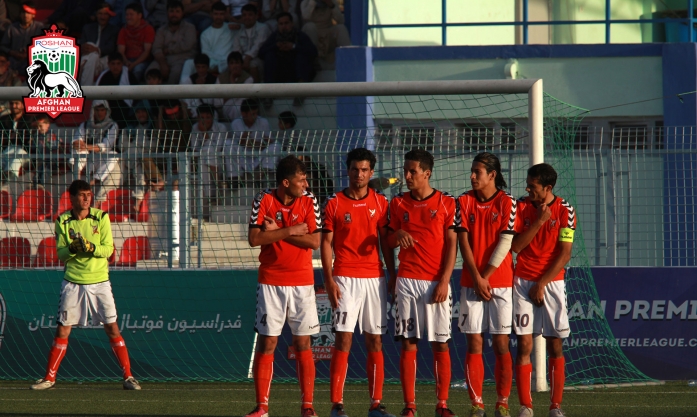 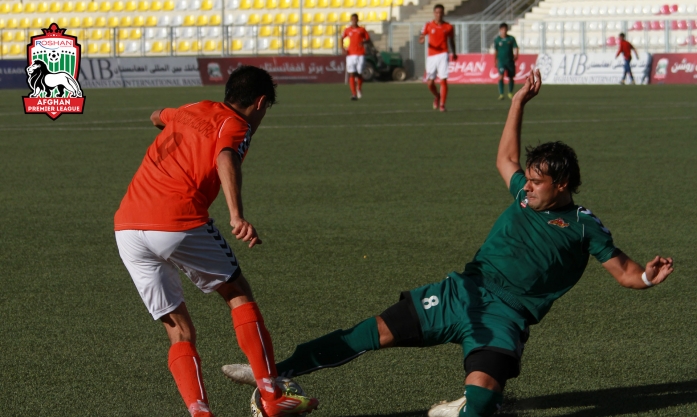 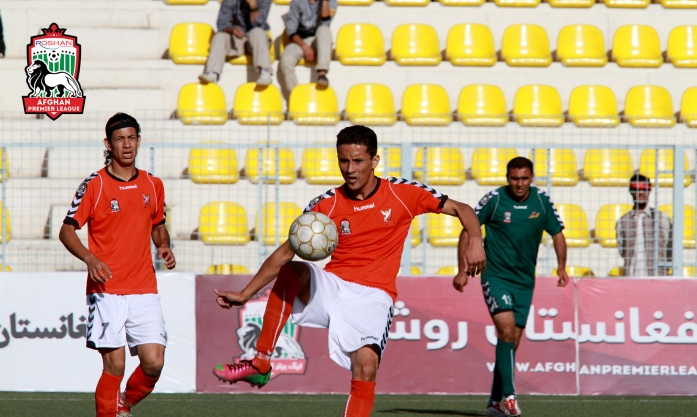 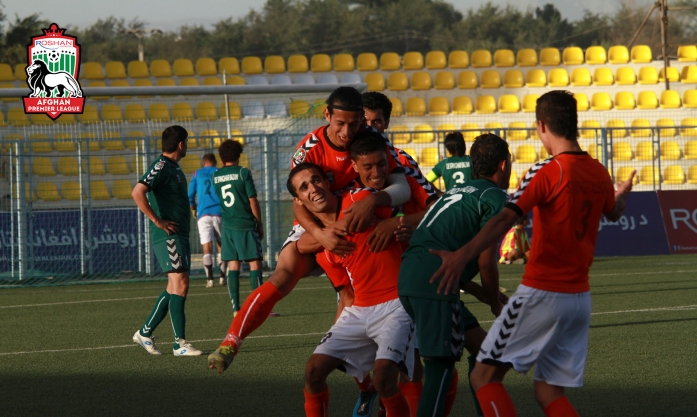 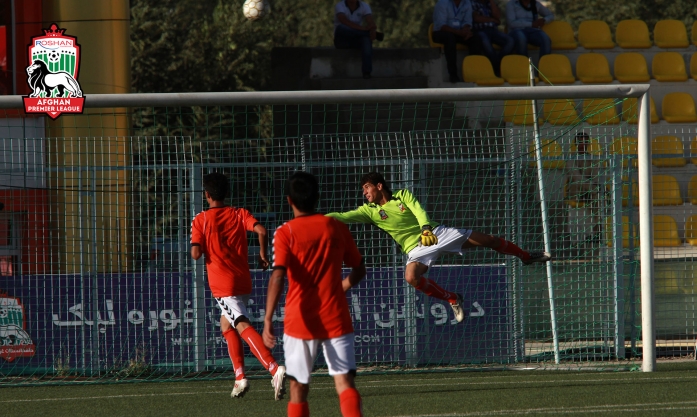 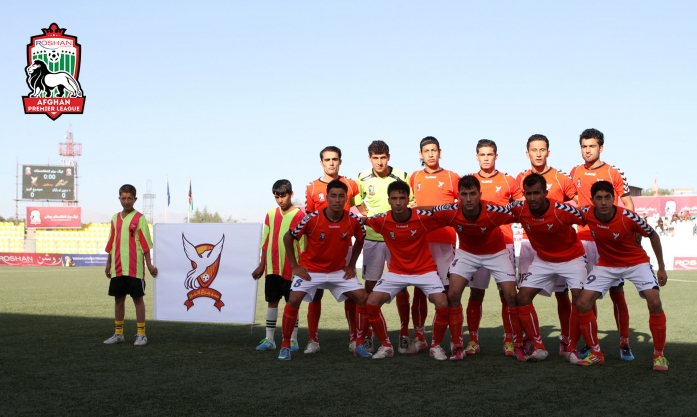 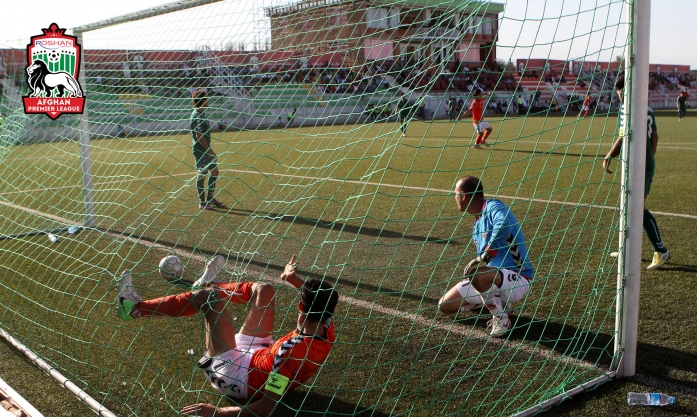 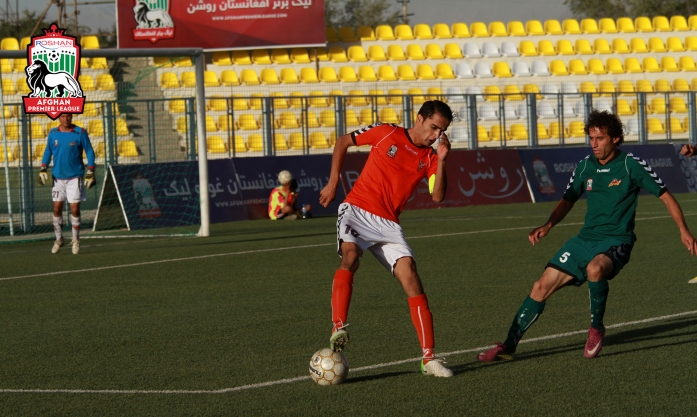 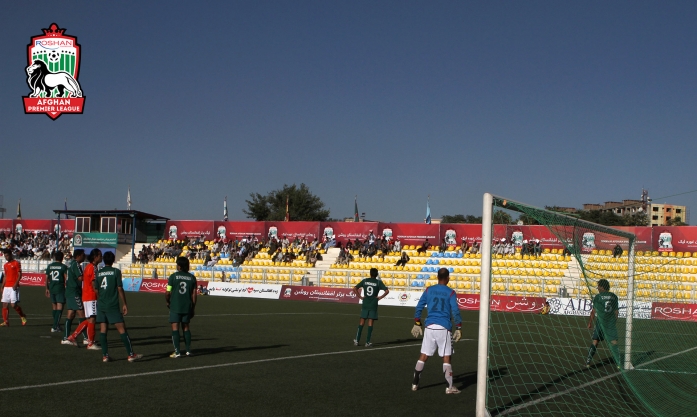 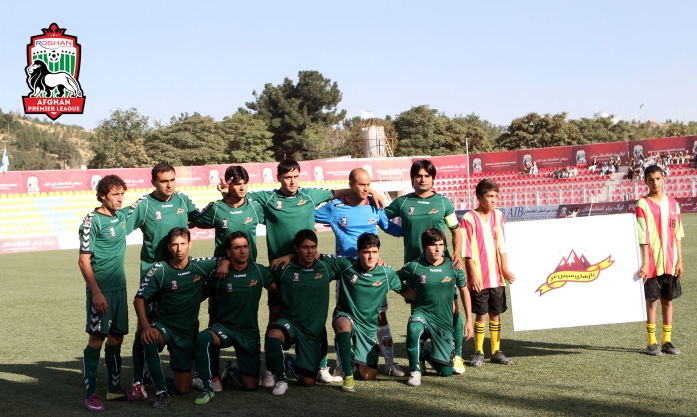 A loss for either team spelled an early exit from the league and a return to disappointed family and friends back home.

The game was a one-sided affair from the opening whistle. Simorgh Alborz’s captain and starting forward Munirulhaq Nadeem (#10) looked in great form in the attacking third alongside fellow forward Fayaz Azizi (#11).  Reinforced further by aggressive midfield play from Mohammad Mohammadi (#7) and Bashir Shikori (#18), the men in orange were able to create four dangerous chances in the first half hour of play.

Simorgh Alborz finally broke through the weak De Spinghar Bazan defense in the 33rd minute.  Mohammadi collected a through pass from his right midfielder on the right side of the box, where he had time to turn, look up, and feed a pass to a streaking Nadeem.  Nadeem had little work to do in tapping the ball home from six meters out.  Simorgh Alborz never looked back.

Mere seconds before the first half expired, Simorgh Alborz unleashed a flurry of shots that left De Spinghar Bazan’s goalkeeper Ata Mohammad Popal (#21) scrambling.  One save was punched back to the top of the box.  A Simorgh Alborz midfielder collected the ball, fed it to midfielder Omeed Naseeb (#9) on his right, who in turn passed to Nadeem six meters out from net.  The play looked like a rough copy of the first goal, and with the same result.  Simorgh led 2-0 at halftime.

For a De Spinghar Bazanoffense whose might in the first half amounted to a sole corner kick, the second half was only slightly better.  De Spinghar Bazan’s attackers managed a mid-distance shot in the 57th minute that barely missed the far post, as well as a free kick attempt in the 86th minute that sailed just over the crossbar.

But by that point, it was far too late.  Simorgh Alborz’sNadeem completed his hat trick in the 60th minute, scoring his third goal of the match following a bobble by Popal in front of his net.  Naseeb and Hashmatullah Shaiq (#13) added two more clinical scores for Simorgh Alborz in the 67th and 89th minutes, respectively, subjecting De Spinghar Bazan to another 5-0 defeat.

Simorgh Alborz remain alive in Group A while De Spinghar Bazan will be playing only for pride in their third and final group stage game in three weeks’ time.