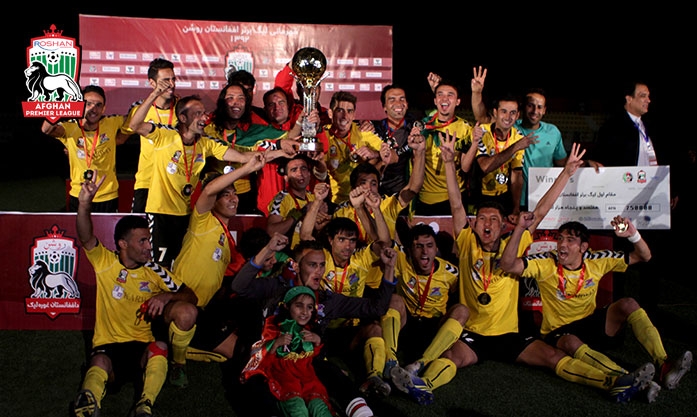 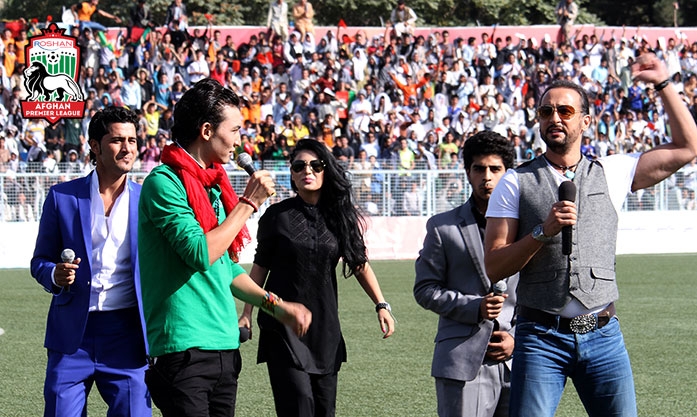 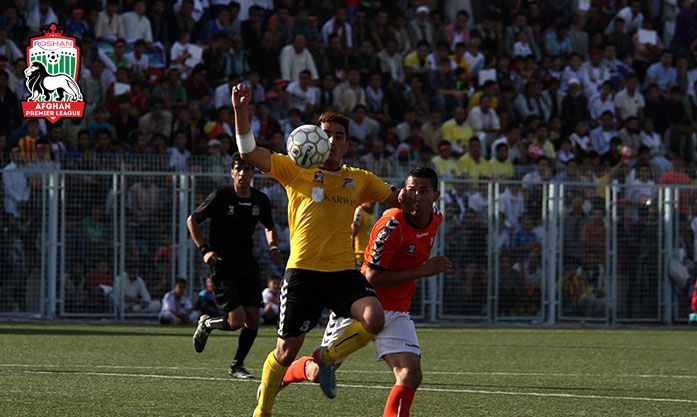 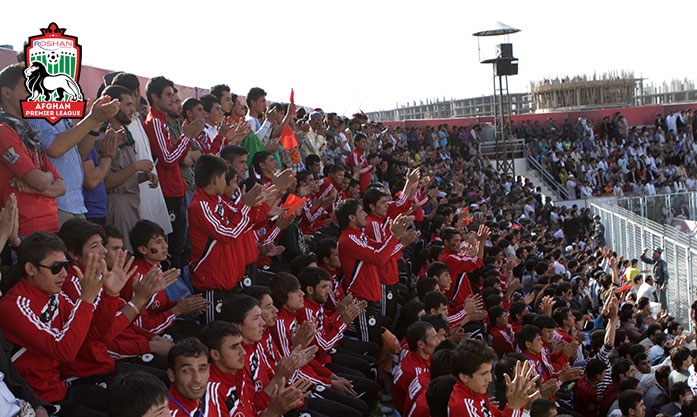 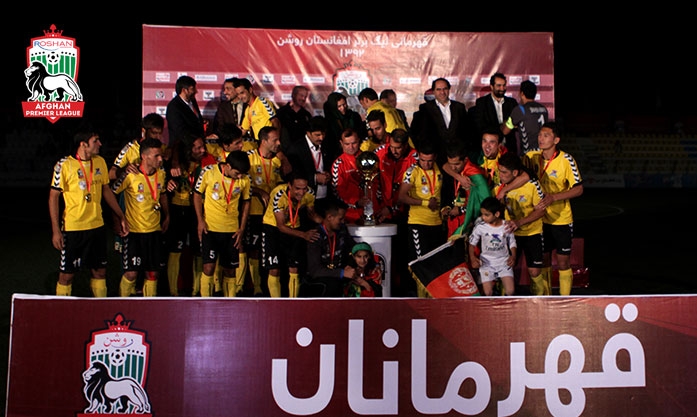 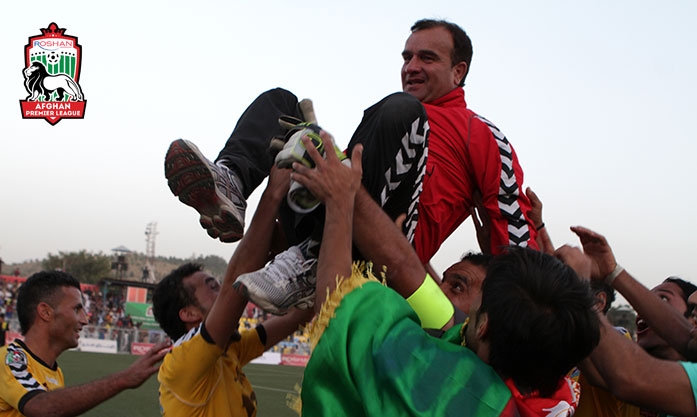 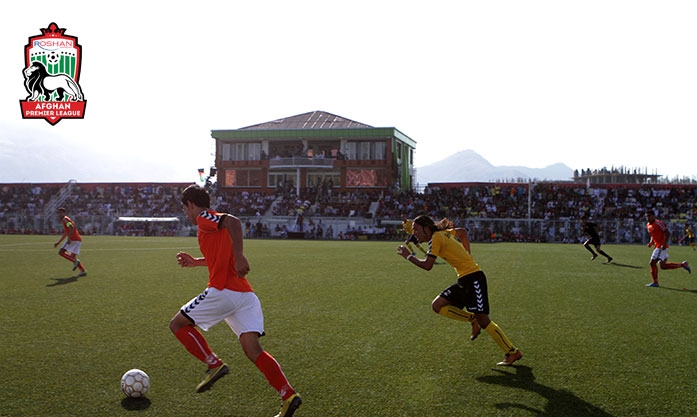 In front of a packed and vibrant AFF Stadium, Shaheen Asmayee and Simorgh Alborz met to decide the 2013 RAPL Champion and the winner of the 750,000 Afghani (~$15,000) cash prize.

Shaheen Asmayee did not even make the playoffs in 2012.  But with an influx of new players this season, including four members of the Afghanistan Naitonal Team, they stormed through the group stage and took down defending champions Toofan Harirod in the semifinals to advance to today’s final.
Simorgh Alborz, on the other hand, has experience on the big stage.  They made it to the RAPL Finals last year, where they suffered a heart-breaking 2-1 defeat against Toofan Harirod.  Led by forward Fayaz Azizi (#11), who comes into today’s game as the front-runner for the Golden Boot Award with six goals on the season, Simorgh Alborz were seeking redemption and the thrill of returning home to jubilant friends and family.
The possession advantage in the first half went to Shaheen Asmayee, but the teams were back-and-forth in their scoring chances.  A punched save by Simorgh Alborz goalkeeper Hassan Koshani (#21) in the 13th minute fell to a streaking Amrudin Sharifi (#9), whose header from close range sailed over the bar.  Two minutes later on the other end of the field, Simorgh Alborz midfielder Mustafa Razai (#8) hit a half-volley from 20 meters that dipped into the cross bar, but stayed out.
Incredibly, the cross bar was called into action twice more in the first half alone.  In the 23rd minute, Shaheen Asmayee’s star striker Hashmat Barakzai (#10) blasted a shot from 25 meters that struck iron.  And ten minutes later, Simorgh Alborz Obaid Habibi (#17) flicked on a free kick with his head that eluded goalkeeper Hameed Yousafzai (#1) but deflected off the goal frame.

The first half ended improbably without a goal being scored.
The second half was a different story, however.  Only six minutes into the half, Shaheen Asmayee forward Mustafa Afshar (#19) heckled the Simorgh Alborz center backs to the point that he was able to steal the ball and tap a pass behind the defense.  Barakzai was right there to pounce on the opportunity.  One-on-one with the goalkeeper, he had no problem passing the ball into the right corner of the goal, setting off ecstatic celebrations among Shaheen supporters in the stands.
Chances for Simorgh Alborz were few and far between for the remainder of the half.  Captain Muniralhaq Nadeem (#10) deceived many supporters when he hit the outside of the net in the 77th minute, missing the frame by a meter.

In the 80th minute, it seemed to be “game over” for Simorgh Alborz when defender Sohail Hakimi (#4) brought down Afshar in the box.  The referee awarded Shaheen Asmayee a penalty kick.  The usually precise Barakzai, however, hesitated on his shot, pushing a feeble attempt to Koshani’s left.  Koshani dived and made the save, keeping his team alive for the last ten minutes of play.

And did his save ever prove crucial!  In the 90th minute, Simorgh Alborz leading goal scorer Fayaz Azizi took a through pass on the right side of the box.  His one touch was a rolling shot past Shaheen Asmayee’s charging goalkeeper Hameed Yousafzai (#1).  The ball found the back of the net at the most crucial moment.
The game went into extra time.

Only three minutes into the first 15-minute extra time period, Barakzai was brought down viciously inside the box by a charging Koshani’s outstretched cleat.  Again the referee awarded Shaheen Asmayee a penalty kick.  Instead of Barakzai taking it again, substitute Mahmood Azad (#13) stepped to the spot.  His shot nicked the underside of the crossbar on its way into the back of the net.

To provide his team a cushion and earn some personal redemption for the missed penalty kick earlier, Barakzai took a through pass from midfielder Azim Najafi (#14) in the 104th minute and, even from a sharp angle, ripped a shot over a diving Koshani.  The lead was now 3-1 for Shaheen Asmayee.
It proved enough, as the defense held through the second extra time period.

Shaheen Asmayee are the champions of the 2013 RAPL season and the winners of the 750,000 Afghani cash prize.  Congratulations!