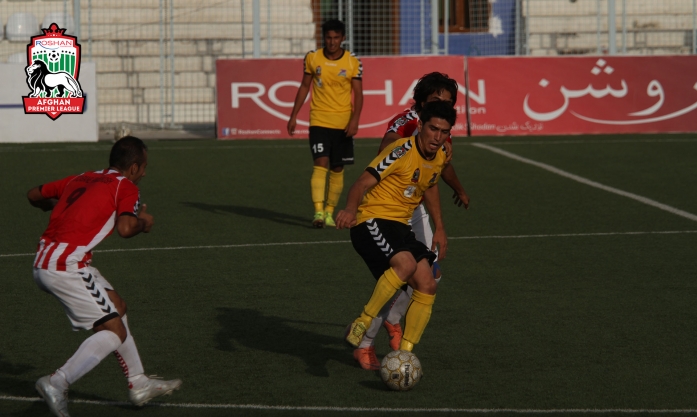 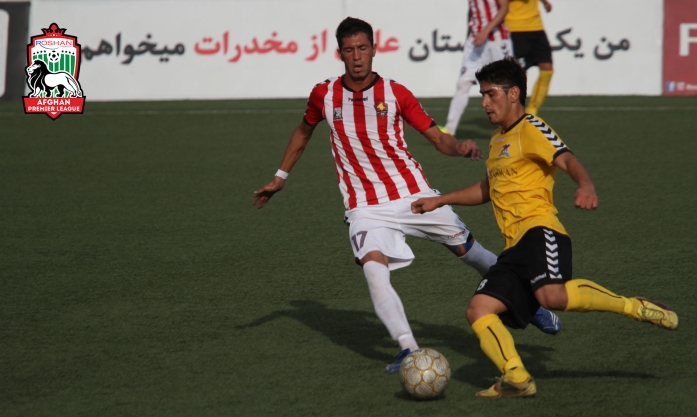 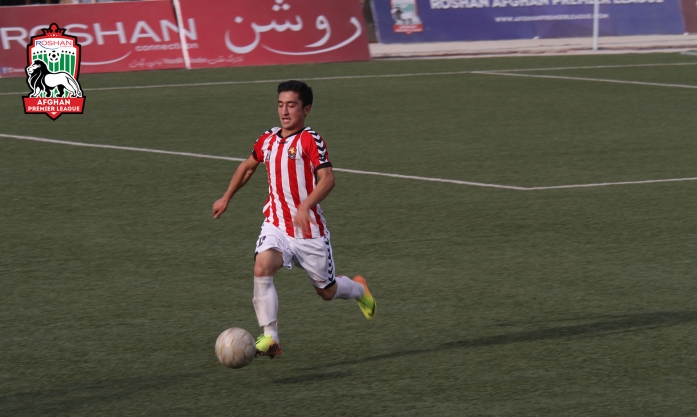 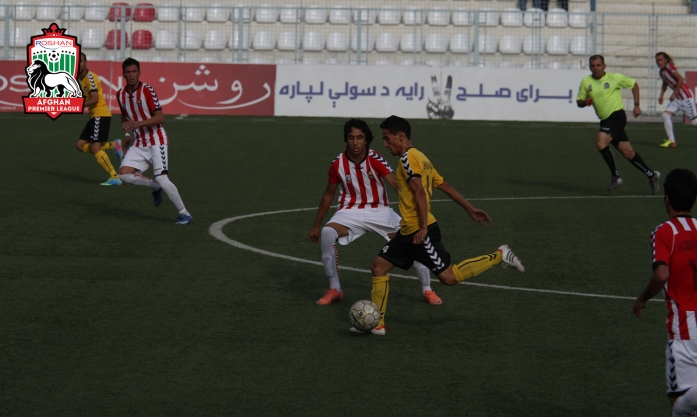 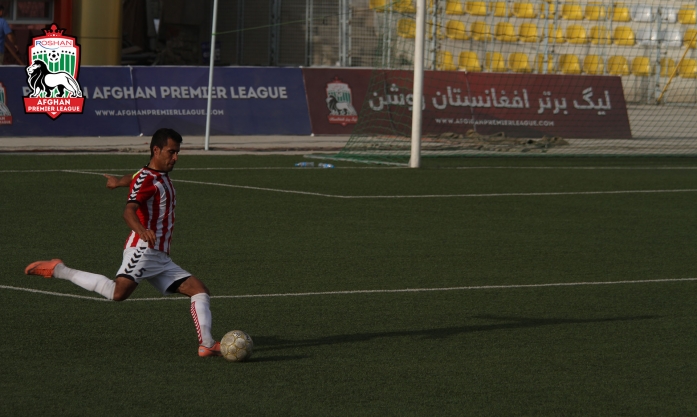 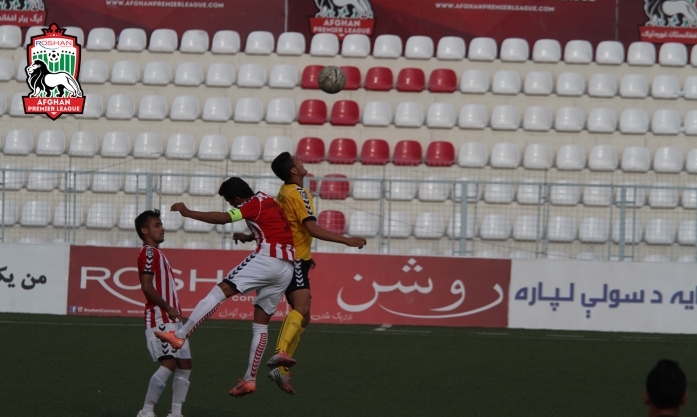 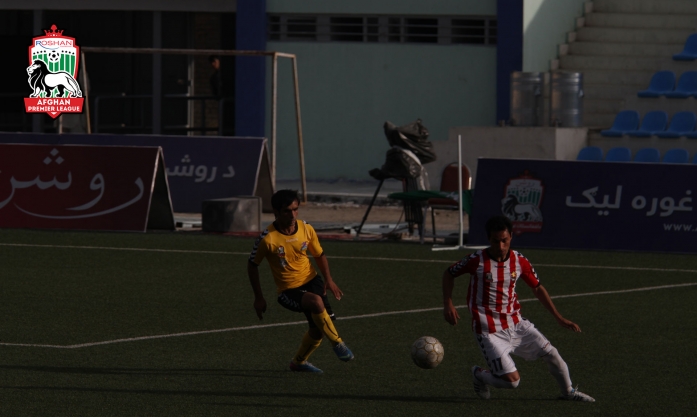 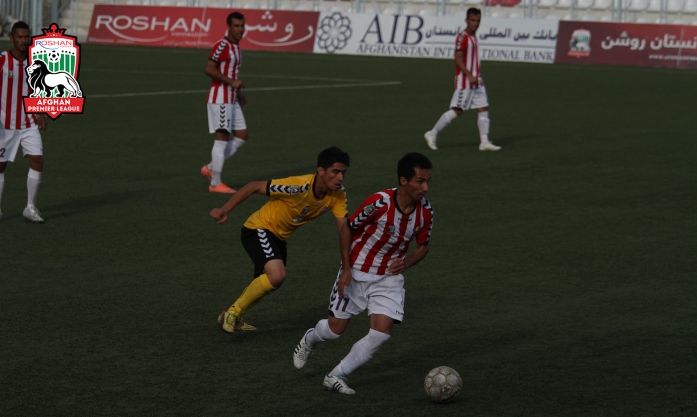 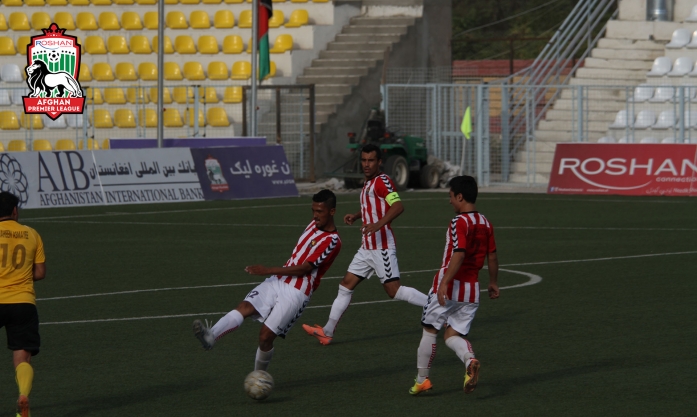 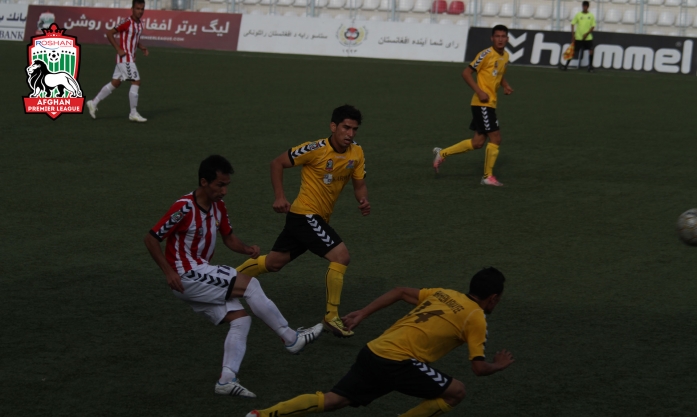 In an eerily quiet AFF Stadium, with no fans and no TV cameras, Shaheen Asmayee squared off against Oqaban Hindukosh for the second time this season, but for the first time that counts.  The first meeting between these two teams was decided 3-1 in Shaheen Asmayee’s favor.  However, due to ineligible players that participated in the match, the results were cancelled to be replaced by those of today’s game.

Oqaban Hindukosh came into the match at the top of Group B, having played two games and won them both.  Due to a favorable goal differential, they have already clinched a spot in the 2013 RAPL semifinals.  Shaheen Asmayee, on the other hand, has only played one game.  They needed a win either today or on Friday against De Abasin Sape to advance to the semifinals.

The first half opened in a disappointing fashion for the Group B-leaders Oqaban Hindukosh.  Goalkeeper Wais Noori (#21) waited a second too long to pick up a stray pass that was trickling toward the edge of his box, by which point Shaheen Asmayee forward Hashmatullah Barakzai (#10) swooped in to nick the ball away from Noori’s outstretched hands.  Barakzai had no difficulties finishing on an empty net only three minutes into the half.

But Oqaban Hindukosh responded well.  In the 16th minute, the team representing central Afghanistan earned a free kick near the right corner flag.  Free-kick taker Anwar Karimi (#11) fooled the Shaheen Asmayee wall by rolling the ball softly to the top of the box, where midfielder Mobin Rasooli (#6) needed just one touch to dispatch the ball off the crossbar and into the net.

Shaheen Asmayee had the better of the chances in the remainder of the half, but were not able to foil a strong Oqaban Hindukosh defense led by captain Farhad Paktyawal (#5).  The game reached halftime knotted at 1-1.

The second half was a story of slowly mounting but not uncontainable Shaheen Asmayee pressure.  Every dangerous attacking chance in the second half except one fell to Shaheen Asmayee.  Barakzai hit a free kick from 20 meters over the bar in the 60th minute, and a minute later had a left-footed blast saved by Oqaban Hindukosh substitute goalkeeper Ali Jabeer Laly (#1).  Barakzai set up fellow forward Amrudeen Sharifi for a 30-meter half-volley in the 70th minute that Laly perried to his left.  Toward the end of the half, the ball rarely left the Oqaban Hindukosh half.

The one chance for Oqaban Hindukosh fell to fiery Ismalai Salangi (#19), who in the 81st minute found himself with a clear pass to goal after his teammate stole a pass cheaply off Shaheen Asmayee’s center back.  Salangi shot low to keeper Hameed Yousafzai’s (#1) left, but Yousafzai got down in time to save the ball.

And so to the Oqaban Hindukosh’s back line’s credit, the game finished in a 1-1 draw.  A semifinal spot in now firmly in Oqaban Hindukosh’s grasp.  Shaheen Asmayee need either a tie or a win in Friday’s match against the Southeast’s De Abasin Sape also to advance to the semifinals.