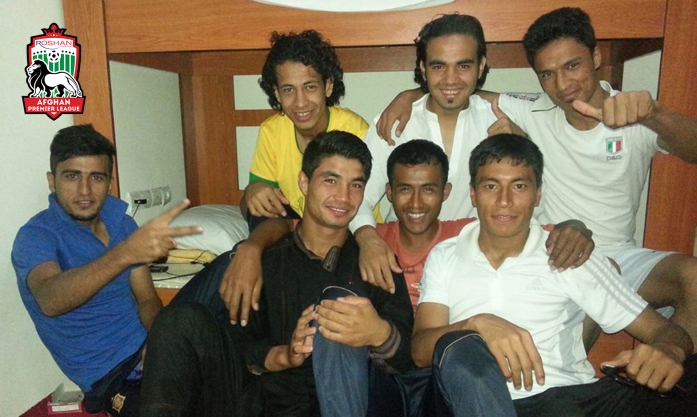 “We can’t go back to Mazar-i-Sharif if we lose,” said Baryalay Safi (#2), the starting right defender for northern Afghanistan’s Simorgz Alborz. His teammates laughed nervously at the comment. There was truth to it. Forward Ahmad Walid Tayab (#19) added, “Everyone is mad at us for not winning our first match. People on Facebook won’t leave us alone. But more than anything, we’re upset with ourselves.”

The team performed well in last year’s Roshan Afghanistan Premier League (RAPL), earning a spot in the finals where they fell 2-1 to western Afghanistan’s Toofan Harirod. Composed of players from five provinces—Balkh, Faryab, Jowzjan, Samangan, and Sar-e Pol—the second edition Simorgz Alborz team has a lot to live up to even though only six players remain from last year’s runner-up squad. “We’re representing everyone back home,” said Tayab.

For this reason, Simorgh Alborz’s 2-2 tie with north eastern Afghanistan’s Mawjhai Amu in their first round match of the 2013 RAPL season was a bitter disappointment. SimorghAlborz led 1-0 and 2-1 at different points of the game and conceded a penalty kick in the 83rd minute that gave Mawjhai Amu the opportunity to equalize at 2-2. There is a feeling among the players that their focus going into the first match was lacking. The team’s captain Munirulhaq Nadeem (#10), for example, got married a mere five days prior to game day.

Everyone on the team realizes they need to sharpen up when they take on eastern Afghanistan’s De Spinghar Bazan this Thursday at AFF Stadium. Kickoff is at 4PM. It’s a win-or-go-home game for both teams. De Spinghar Bazan lost 5-0 to defending champions Toofan Harirod in their first match. The game will be broadcast on TOLO TV, Lemar TV, Radio Arman, Radio Arakozia, and YouTube live streaming.

Like players on many other teams, the young men of Simorgh Alborz are foregoing semesters in school, time with family, and even jobs back home to come to Kabul for the RAPL. The motivating force is not money. “What money?” is a refrain heard among many RAPL players (and football players in Afghanistan generally). “We do it for love of the game,” declared Mohammad Hussain (#7), Simorgh Alborz’s center back and sole goal scorer for Simorgh Alborzin last year’s RAPL final. “That’s because you don’t have a job,” retorted Tayab. There’s disagreement within the team over the prudence of pursuing football in the long term if it means sacrificing employment and financial security.

But that’s a question for another time and place. For now, these players have one thought on their minds: win on Thursday.