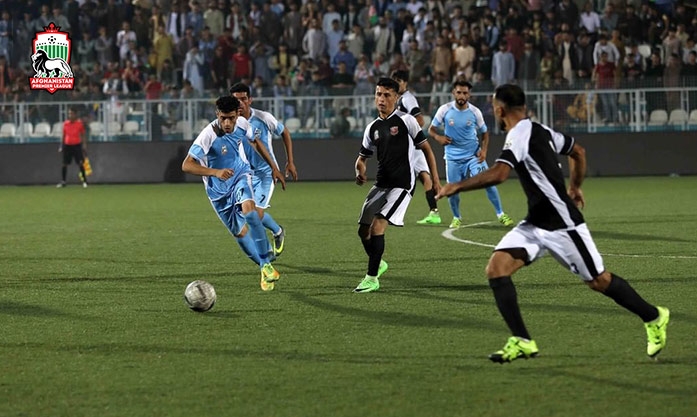 Mawjhai Amu lost in an exciting match against Toofan Harirod

In the first match of the second week of the 8th season of Afghanistan Premier League group stage competitions, Mawjhai Amu, the representative of the northeast zone of the country, confronted Toofan Harirod.

Toofan Harirod launched the game with back to back shots and attacks on the opponent’s goal and in just 7th minute, they score the starter with a beautiful shot of Nabi Ishaqzai and led the game by 1-0. Mawjhai Amu also started well, losing several opportunities, but failed to score any goal in the first half. But it was Haseebullah Ahmadi who scored the second goal for Toofan Harirod and made the comeback harder for their rivals for the second half. The first half ended 2-0 in favor of Toofan Harirod.

Second half started with early substitutions from the both side and Mawjhai Amu started the game with outstanding performance and took the charge of the match with a beautiful goal from Hashmatullah Barakzai in the 51st minute and brought the results closer to 2-1. Mawjhai Amu did not stopped and continued the brilliant show in style with constant attacks on Toofan Harirod side and in just one minute changed the score board with a stunning goal of Obaidullah Afzali, equaling the score by 2-2. The crowd was spectacular.

After the 2nd goal for Mawjhai Amu, both teams continued defensively and finally, Toofan Harirod led the match once again with a beautiful goal by Rahmatullah Khairkhwah in the 77th minute by 3-2.

The match ended with the same score of 77th minute, in favor of Toofan Harirod and Rahmatullah Khairkhwah was named ‘Man of the match’ for his best performance and winning goal for his side.