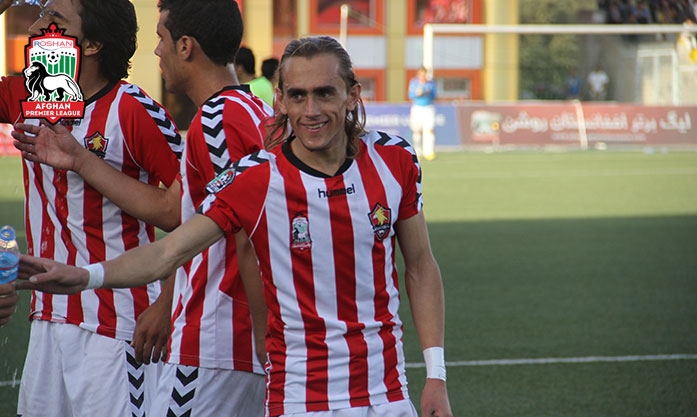 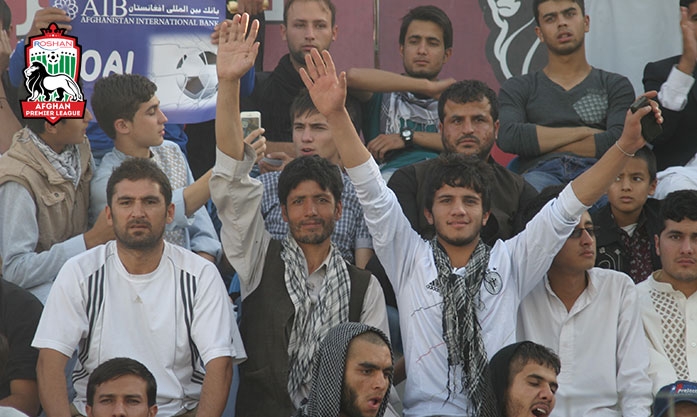 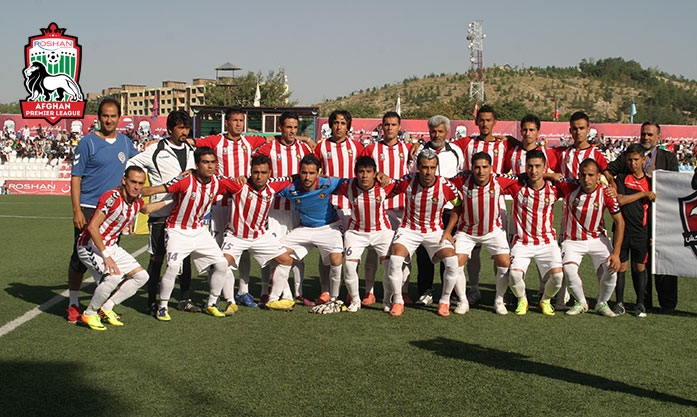 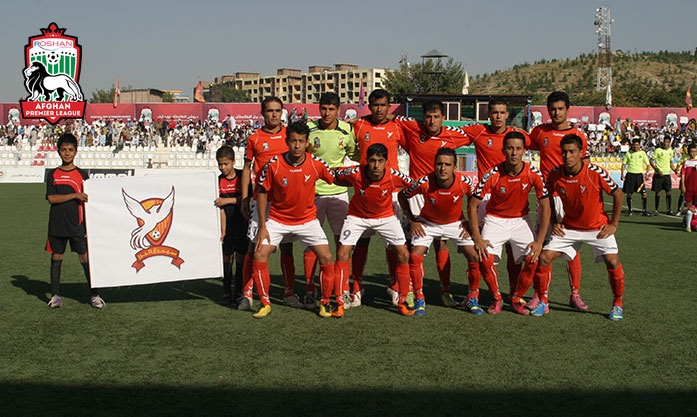 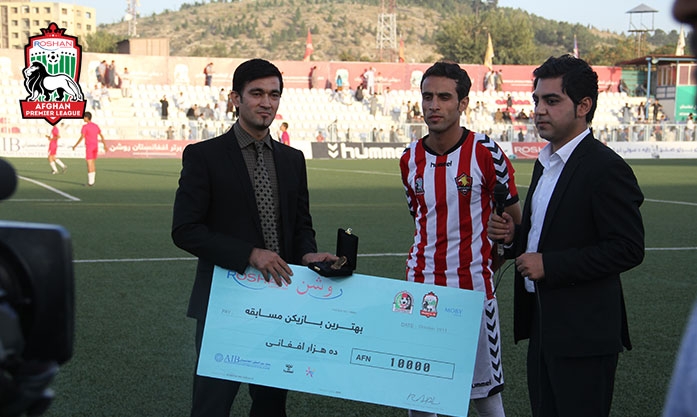 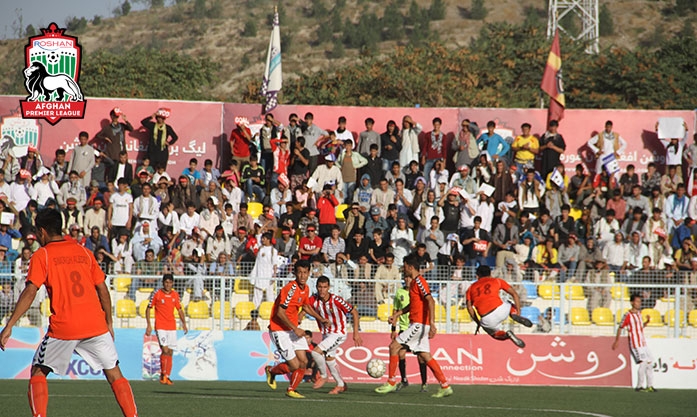 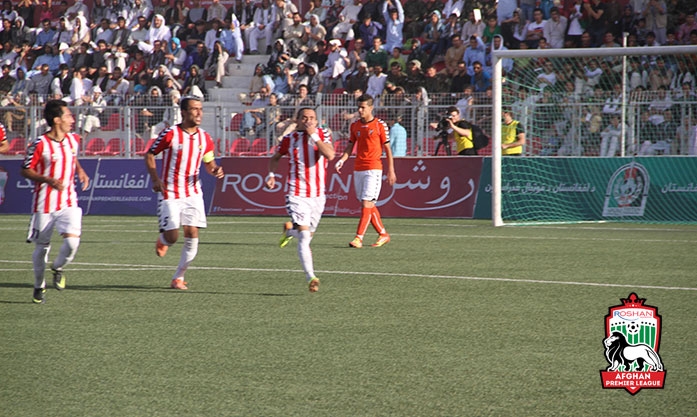 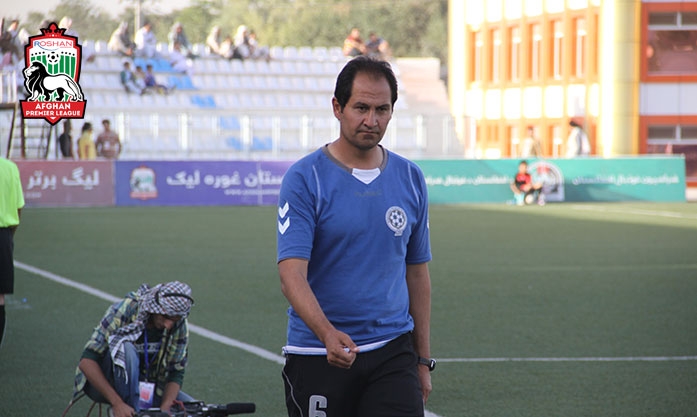 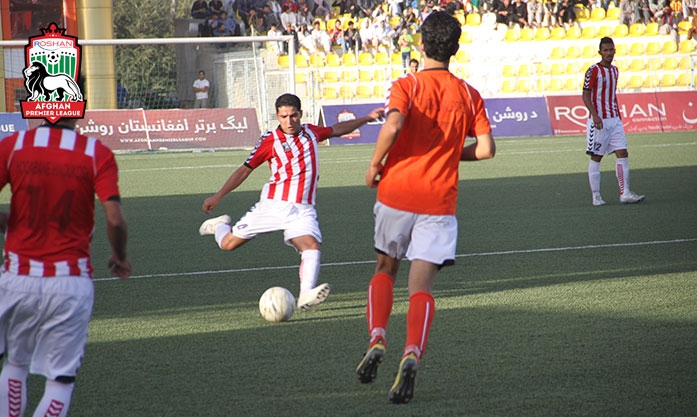 The first of two semifinal legs between the North’s Simorgh Alborz and Central’s Oqaban Hindukosh kicked off today at Kabul’s AFF Stadium.  Last year’s runners-up Simorgh Alborz came into the match riding a high after tying a very strong Toofan Harirod 3-3 in their last group stage game.  Oqaban Hindukosh was likewise confident, not having lost a match thus far in the 2013 season.  They are also led by Head Coach Elyas Manochehr, whom many players consider to be the best trainer in the RAPL.

The two teams seemed to be sizing each other up for the first 20 minutes of the game, during which time no dangerous chances were created.  But then, in the 21st minute, Oqaban Hindukosh forward Abdul Sabor Asir (#10) produced a piece of art.  Gathering the ball on the right side of the field, Asir began gliding to his left.  Three times he faked going right and instead pulled the ball left.  Leaving five defenders in his wake, he eventually squared up in front of goal and placed a perfect shot to the goal’s right corner.  The crowd went wild for what was the best goal of the season thus far.

Only four minutes later, Simorgh Alborz forward and leading goal scorer Fayaz Azizi (#11) headed a ball past Oqaban Hindukosh goalkeeper Ali Jabeer Laly (#1).  As the ball was headed into the goal, however, defender Omaid Azimi (#4) heroically cleared the ball off the line, ramming into the goal post in the process.  Fayaz Azizi had another good chance in the 37th minute when the ball fell to him 12 meters from goal.  His shot was blocked by Laly, however, and Simorgh Alborz entered halftime unable to erase their one-goal deficit.

The second half opened with more disappointment for Simorgh Alborz.  A stray pass from a Simorgh Alborz defender was deflected into the path of fiery Oqaban Hindukosh forward Ezmary Solangi (#19), who was running in the opposite direction behind the defense.  One-on-one with Simorgh Alborz goalkeeper Hekmat Muradi (#1), Solangi calmly placed the ball into the right corner of the goal, putting his team up 2-0.  The crowd was chanting “Ezmary-Ezmary” every time he touched the ball the rest of the game.

Solangi missed a second golden opportunity in the 72nd minute when he again found himself one-on-one with the goalkeeper.  This time, however, instead of dribbling around Muradi, he tried to chip him.  His chip went well wide of target.

This opened up the chance for Fayaz Azizi to decrease the goal deficit ten minutes later.  Taking a cheeky through pass from a midfielder, Azizi needed only one touch with the outside of his left foot to place the ball in the left corner of the goal.  Together with teammate Mohammad Mohammadi (#7), who cleared a shot off the goal line in injury time, Azizi ensured his team has a chance to prevail in the second semifinal leg this Monday.