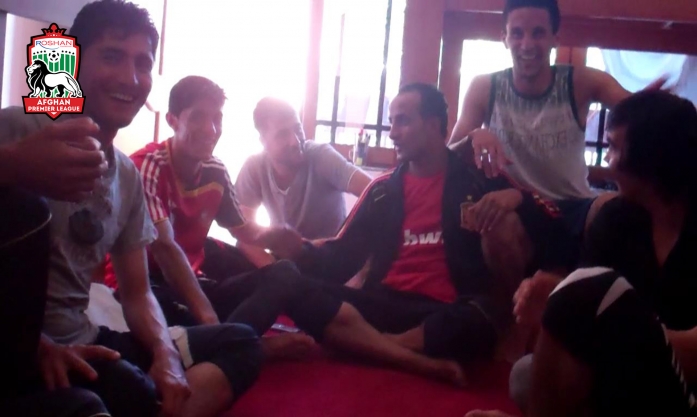 Life in the RAPL Players’ House

We sat in a rough circle, some players cross-legged on the new maroon carpeting and some lounging on one of the three bunk-beds in the room.  The sound of midday programming droned on the TV overhead.  The heaps of sweaty football gear, including lines of cleats, had mercifully been placed outside on the balcony.

“I think we’ll win 2-0,” said Arif Basiri in reference to his team’s match this Thursday.  “My club from Kunduz recently played a club from Mazar-i-Sharif, and we won 2-1.  A lot of the same players from those clubs are now in the Premier League.”

Basiri’s team is called Mawjhai Amu (“The Amu Waves”) and represents northeastern Afghanistan in the 2013 Roshan Afghan Premier League (RAPL).  Mawjhai Amu have not elected a captain yet, but Basiri will be wearing #10 this Thursday at 4PM when his side takes on northern Afghanistan’s Simorgh Alborz (a name evoking a mythical bird) at the Afghanistan Football Federation Stadium.

To solicit a counter-prediction from the Simorgh Alborz players, we merely had to walk down one level and knock on the door bearing their team’s logo.  For the duration of the league, the RAPL hosts the players and coaches from all eight league teams in a massive four-story residence in a quiet Kabul neighborhood.  The facility has a garden, an outdoor cafeteria, dorm-style bedrooms, and a few TVs on each floor.

One resource in short supply, however, is water.  The showers are running constantly.  We heard the story of two separate players who were mid-shampoo when the water tanks ran dry.  Their teammates made sure to get their fill of teasing on their way to fetch buckets of water.

We also met a player who compared both his style of play and his body to Christiano Ronaldo.  He proved the latter in striking style right then and there.  We’ll have to wait for a verdict on his style of play until Thursday, when he will be wearing, predictably, #7 for Mawjhai Amu.

Still, for a house with over 100 young men under its roof, the mood is quieter than one might expect.  The players are still getting to know their counterparts from other regions.  Plus, everyone besides their teammates is an obstacle standing in the way of the RAPL Cup.

“I predict the game will end 3-1 in our favor,” said Mustafa Razai, the starting center midfielder for Simorgh Alborz and member of the Afghanistan National Team.  “But a win or loss is not as important as is having a good match.  Mawjhai Amu is a young and energetic side and we wish them well.”

Islam Amiri, captain of the Afghanistan National Team, said much the same thing in the lead-up to his team’s match against Pakistan last week.

Both Razai and Amiri should be commended for their sportsmanship.  But when the whistle blows on Thursday afternoon, it’s game on.