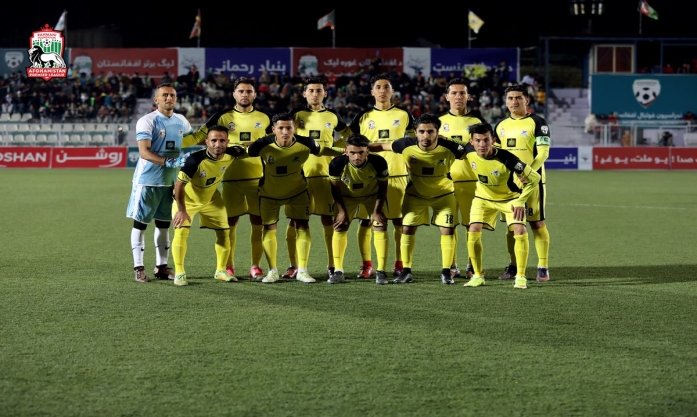 The two finalists of last year are going to battle in the semi-finals of APL 2018 Rahmani foundation, today, 22nd October 2018, at 05:30 pm in the Football federation of Afghanistan.

Previously, both teams have played three matches in the group stage. Shaheen Asmayee played against Mawjhai Amu in its first match, the opening game of APL 2018 Rahmani foundation and stood its ground with 2 – 0 result. The team then played its second group stage match, 5th group stage match of APL 2018 against De Abasin Sape, scarcely accumulating three more points through a 1 – 0 win. And, the last match this team played was against De Spinghar Bazan, whereas, by defeating its rival with 3 – 1 result, Shaheen escalated to the semi-finals with total 9 points.

De Maiwand Atalan, on the other hand, played in their first match, second group stage match against Oqaban Hindukosh and defeated its rival with 2 – 0 result. The team then played its second match against Toofan Harirod and conceded the game with the aggregate 3 – 0 result. Finally, Atalan played a decisive game against Simorgh Alborz for its most crucial 3 points and escalated to the semi-finals with 6 points only.

“The game today against Shaheen Asmayee is very critical and decisive. Shaheen Asmayee is the championship claimer, but De Maiwand Atalan has also carried its exercises properly and we are well inspired to win this game and find our way to the final. Our formation today will be 4-4-2, we have one injured player, Mortaza Jafari, the defense line player can’t attend the game, also, two more of our players are slightly injured, but if they appeared to be in a better condition later, they may get a chance to play but generally, there might be certain changes compared to the previous games.” Said Mr. Abdul Haq Faizi, the coach of De Maiwand Atalan. He added: “Our opponent, Shaheen Asmayee has better facilities, it has been conducting training camps in Tajikistan, the players had plenty of time and have been regularly carrying their exercises compared to the rest of teams who joined this tournament without preparations, Shaheen Asmayee is very committed, it has been the title holder consecutively for many years, it is a powerful team, we are also trying to be perfectly tuned in order to play a good game.”

“Our opponent has played against us in the final match of last year as well and it claims the APL title, we are well prepared, and our message is that, we play to cheer our fans and we are doing our best to keep our fans satisfied with our game. None of our players are wounded or excluded, most probably our formation today will be like the second group stage match.” Said Mujtaba Faiz, the coach of Shaheen Asmayee.

The match will be broadcasted LIVE on Lemar TV and simulcast on Arman FM, Arakozia FM also online via the APL Official YouTube Channel. Subscribe to the APL YouTube page (www.youtube.com/afghanpremierleague) for the match highlights. Like APL Instagram (Afghanpremierleague.official) for more updated photos of you favorite players and teams. Read more about the coming events on (www.afghanpremierleague.com).