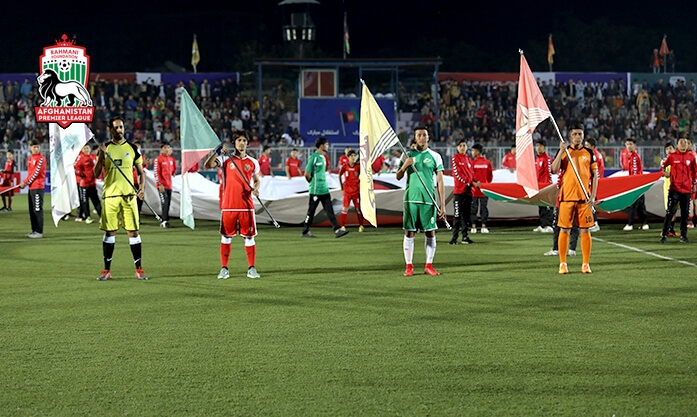 Today, 25th October 2018, the Afghanistan football federation will host the final match of RFAPL 2018 at 05:30 pm. This thrilling match is between Shaheen Asmayee, the representative of capital and the four times title holder of APL, and Toofan Harirod, west zone representative.

Toofan Harirod hasn’t come this far since the past six years. But accumulating 9 points out of three consecutive victories respectively against, Simorgh Alborz, De Maiwand Atalan, and De Spinghar Bazan, in the group stage and defeating De Abasin Sape in the semi-finals, the team had an exhilarating journey to the final match of this season.

Shaheen Asmayee, the four times championship title holder, Toofan’s powerful rival in the valuable game today, appeared as perfect in the RFAPL 2018 as it has been since the past six years. Shaheen Asmayee Also escalated to the Semi-finals with no loss in the group stage, and a total of 9 points through victories against Mawjhai Amu, De Abasin Sape and De Spinghar Bazan. The team defeated its runner up rival of past year in the semi-final and advanced to the final.

Both teams appear to be in an almost equal level with their talented players, however, Shaheen claims to be more powerful and is obliged to protect its dignity by maintaining the record so the team won’t let go its home ground easily. Toofan on the other hand is well committed to make a change, but they are about to be roughly challenged in today’s game.

“Toofan Harirod hasn’t played against a real team until now. This is the first time the team is about to play against such a competent opponent, in the final. Today, Shaheen Asmayee will show its rival that they haven’t come this far so easy.” Said the coach of Shaheen Asmayee, Mujtaba Faiz.” He added: “Shaheen Asmayee is totally ready to mark its fifth win by this game. Our formation and team procedures are to be altered, Shaheen Asmayee will enter the ground in a different figure today. We have analyzed the strengths and weaknesses of Toofan Harirod with our technical team. Our formation today will be 4 – 3 – 3 and none of our players are injured or excluded.”

“So far we have been regularly carrying out our exercises and we are totally ready for today’s game. We had only one day to rest, however, we took advantage of the time to the very possible extent and our players are now ready for a better game. It must be mentioned that the Football game can’t be predicted but our players are ready. I personally chose the players of Toofan Harirod in this season and they reached so far to the finals. Our players are prepared for victory, there is no injured or excluded player, we are hopeful to win this game.” Said Hamidullah Massoudi, coach of Toofan Harirod.