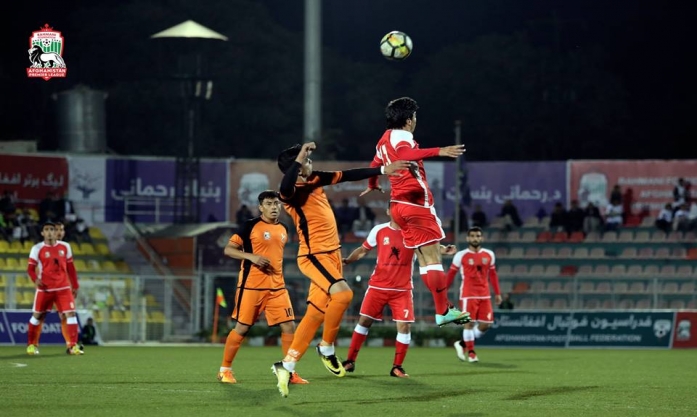 De Maiwand Atalan escalated to the semi-finals by defeating Simorgh Alborz in the game played today, 16th October 2018, at 06:00 pm in the Football federation of Afghanistan. This was the tenth group stage match of APL 2018 Rahmani foundation.

So far both teams had accumulated three points, therefore, this match was of value for both teams in order for securing a place in the semi-finals. But although the game had a very slow tempo in the start of first half, De Maiwand Atalan, more alert for having a one goal difference with their rivals, situated more attacks and managed their defense line properly against the various counter attacks made by Simorgh Alborz.

De Maiwand Atalan’s efforts paid off quickly. Abdul Wahed Noorzai carried the ball toward the goal exquisitely by dribbling a defense line player, just while the rest had marched into the mid-field, so the goalie, Hekmatullah Muradi came closer to seize the ball but the talented player passed it to his teammate at the right moment when the goal was all free and Faiz Mohammad Faizy patiently scored the first goal for his team on the 10th minute.

Simorgh Alborz failed to adequately determine its attacking scheme throughout the first 45 minutes of the game, however, it clearly seemed that they had pushed their rivals immensely backward on their defense line. The first half ended with 1 – 0 result close to De Maiwand Atalan’s goal.

Except for the fact that Simorgh Alborz exponentially increased their attacks, the scenario didn’t change much in the second half. The game had a steady rhythm, Simorgh attacking over and over again, but Atalan didn’t even situate enough counter attacks, it seemed that the team was satisfied with the 1 – 0 result. All the rest of 45 minutes of the second half also passed by without any meaningful instances. But the situation got as worse as it could for Simorgh Alborz when Ghulam Rasul Fazli scored the second goal for his team during the last moments of the 6 extra minutes of the game.

The match ended with 2 – 0 for De Maiwand Atalan.