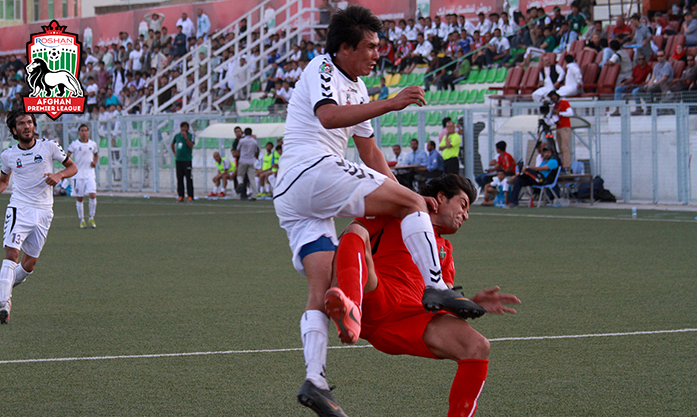 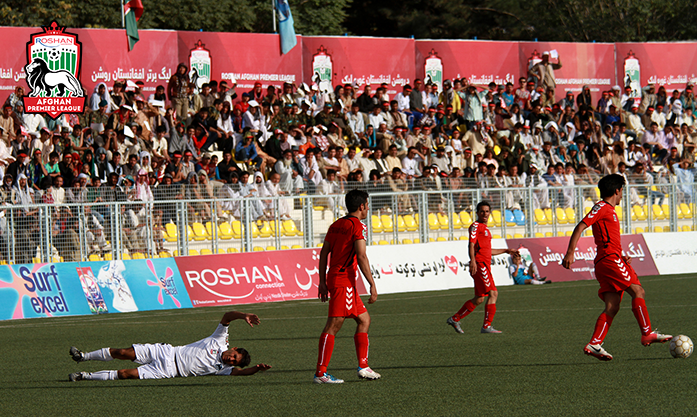 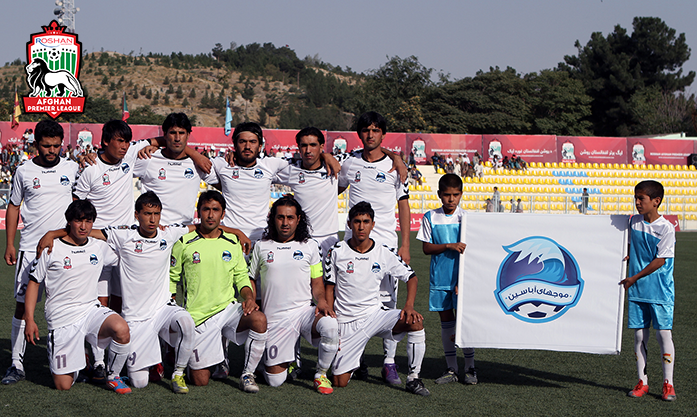 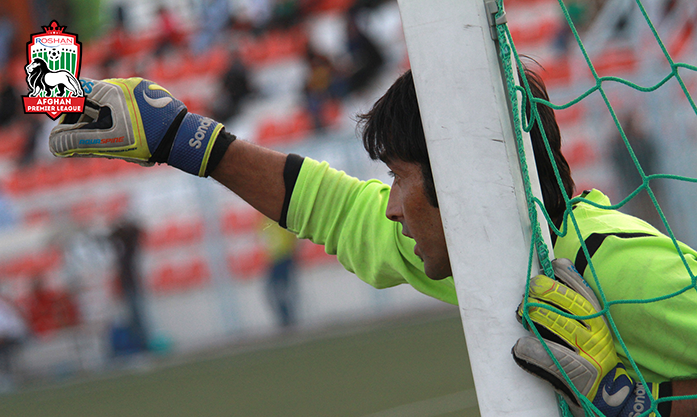 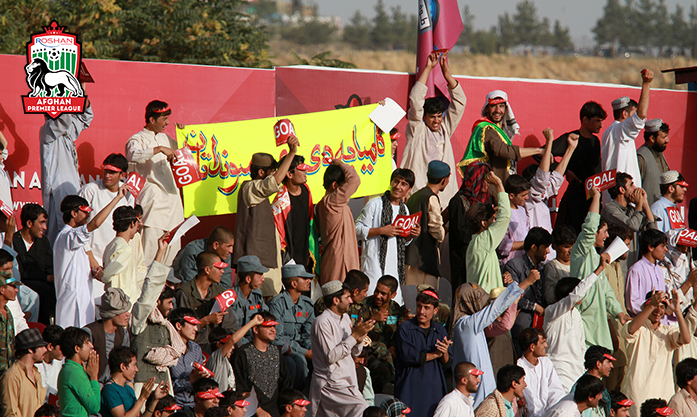 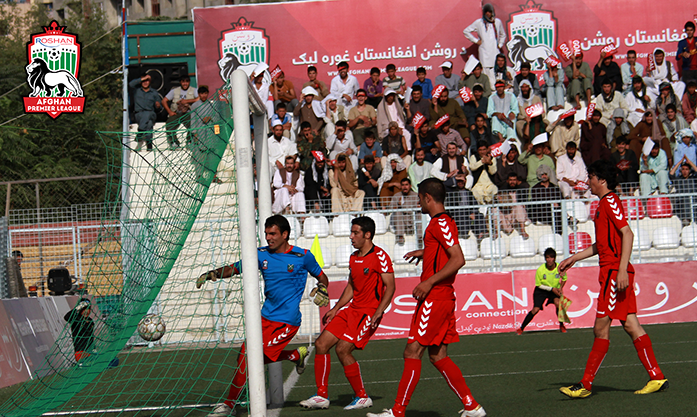 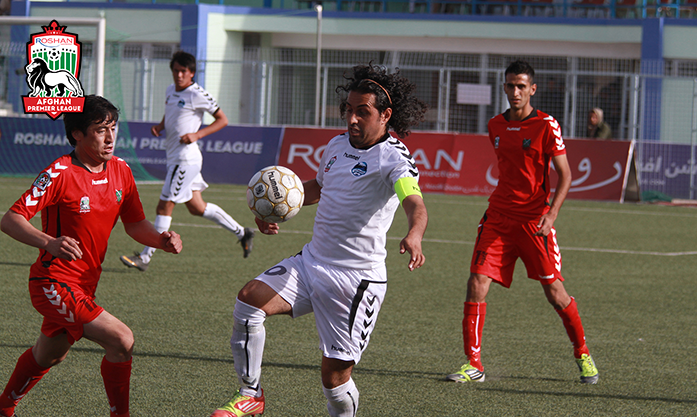 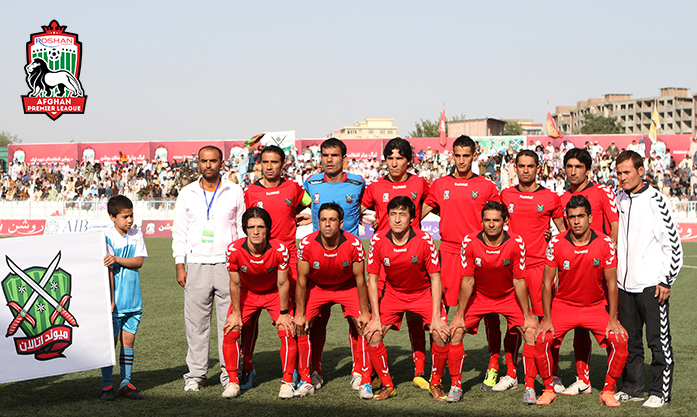 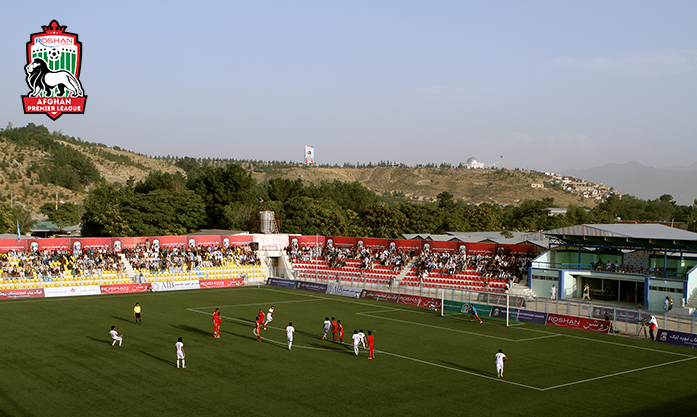 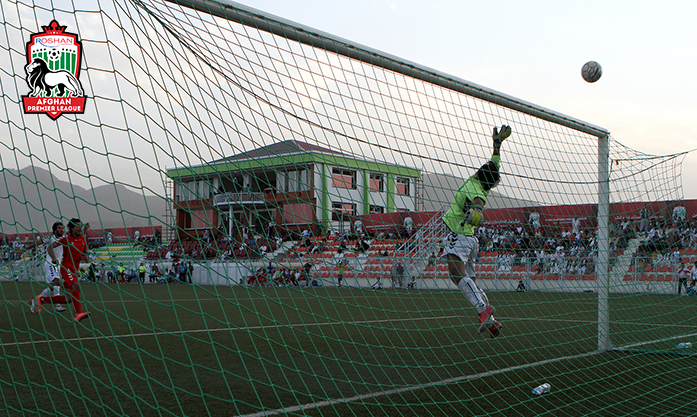 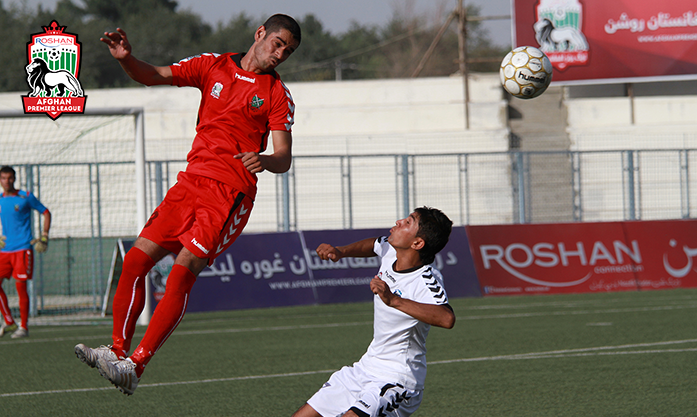 Due to the geographic proximity of the teams, players from both sides acknowledged that today’s match feels like a meeting between rivals.  Then again, “Every team on the other side of the field is our rival, even if they are our brothers,” said De Maiwand Atalan captain Sami Ghairatmal (#8), whose twin sons will be watching him on TV back home in Kandahar.

The tempo of the game was set early by De Maiwand Atalan’s dynamic attacking duo: Faiz Mohammad Faizi (#9) and Sayed Baqir (#11).  Baqir hit the crossbar in the 5th minute of play following a feeble goal kick clearance from De Abasin Sape’s goalkeeper Bashir Ahmad Darman (#1).  Faizi and Baqir continued to hold a high defensive line for the remainder of the half, which nearly paid off again in the 43rd minute when De Maiwand Atalan’s Baryalay (#16) blasted another shot off the crossbar following a Faizi cross.

On the other end of the pitch, the De Maiwand Atalan defense was playing an offsides trap, meaning that their defense intentionally lined up as close to midfield as possible to draw the opposing team’s forwards offsides.  It largely achieved its aim, with five offsides called against De Abasin Sapein the first half hour of play.

But as the mantra goes, a team lives and dies by its offsides trap.  In the 24th minute, a through ball from the De Abasin Sape midfield found a streaking Aimal Mangal (#15) onsides and with acres of space on the right flank.  He cut in towards goal, where he attempted a driven shot to the far corner.  De Maiwand Atalan’s goalkeeper Abdul Qayoom Hayand (#21) made the stop, but his save deflected off his own defender and into the goal.

De Abasin Sape went into halftime with an improbable 1-0 lead.

Despite continued high pressure from De Maiwand Atalan at the beginning of the second half, De Abasin Sape incrementally were able to turn the tide of the game.  They did so mainly through grit, hustle, and the desire to win.  De Abasin Sape forward Mohammad Arif (#7) whipped a shot just over the bar in the 58th minute, while goalkeeper Darman contributed great saves on the other end in the 63rd, 80th, and 91stminutes.

De Abasin Sape’s hard work paid off again in the 67th minute.  A free kick from deep in their defensive half was launched forward into the De Maiwand Atalan box.  Forward Hashmatullah Azizi (#11) capitalized on the De Maiwand Atalan backline’s hesitancy and headed a simple finish past Hayand to give his side a 2-0 lead.

De Abasin Sape added a shot off the crossbar in the 88th minute for excitement’s sake, and their two goals were enough to hold on for the victory.  They will be very pleased with the heart they showed in today’s match at the same time the De Maiwand Atalan squad will have to think hard about what went wrong.