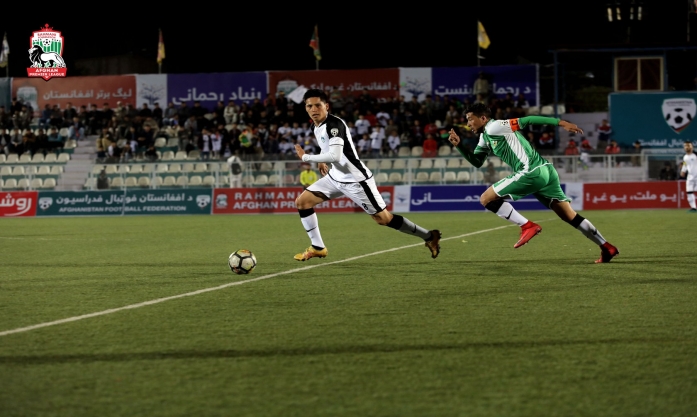 Exactly as predicted by Mr. Zia Azimi the coach of De Spinghar Bazan, rivals to the well-composed team, De Abasin Sape, which appeared quite dominant in their first group match of APL 2018 Rahmani foundation, compared to the previous season. It was quite obvious that the players hired from national team, with more experience of serious grounds, are truly game changers.

Abasin took a very early lead on the 2nd minute as Zainudin Sharifi, the well-known striker assaulted the goal of their rivals and only 7 minutes later, Obaidullah Afzali scored the second goal for his team.

The players of De Spinghar bazan started to panic as of the second goal which led them to even miss the good opportunities for counter-attacks; a weak attitude toward the flow of the game resulting in a sort of overall mismanagement.

Soon after the second goal and as the opponents turned roughly serious about compensating their loss; De Abasin Sape unwillingly chose to continue defense attitude, using only certain counter-attacks with no more than one striker running ahead over the opponent’s goal.

The rhythm of the game kept turning faster exponentially until the last minute of the first half and further on, as the efforts of De Spinghar Bazan paid off and Hedayatullah Quraishi scored the first goal of his team on the 44th minute which was quite useful for the team to regain its spirit but the 2 extra minutes were capitalized with the counter strikes of their rivals still on lead and the half ended with the 2 – 1 result.

De Spinghar Bazan started the second half with self-confidence, whilst De Abasin Sape was equally and in a sense, even more powerful and dominant as of using both the counter strikes as well as situating direct attacks. The 60th Minute of the game was of luck for De Abasin Sape and Obaidullah Afzali ceased an almost lost opportunity and scored the third goal for his team, making the game harder for De Spinghar Bazan.

De Abasin Sape was on lead throughout the second half, both teams situated several attacks and were trying hard with equal concentration over the defense as well as the assaulting line which then turned useful for De Spinghar Bazan and Sher Ali Lali scored the second goal for his team on 87th minute; situating a nice escape and catch flowing rhythm and the game ended with 3 – 2 result.

With this, De Abasin Sape is the second team gaining its three points in the group A.