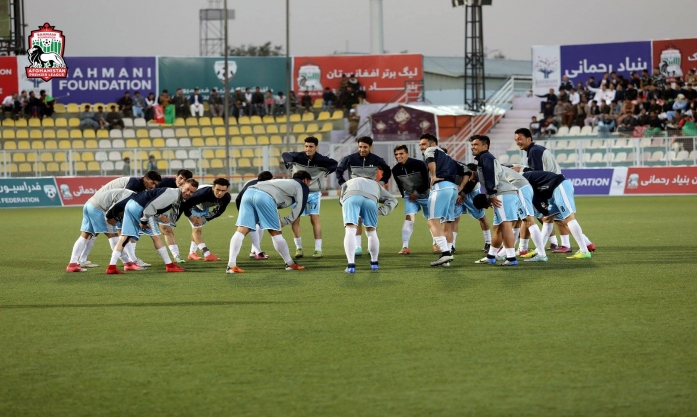 Battle for the final match’s ticket

The second Semi-final match of APL 2018 Rahmani Foundation is on the way in the Afghanistan Football Federation (AFF) stadium today, October 23rd, 2018. De Abasin Sape will battle Toofan Harirod. The match will be kicked-off at 5:30 pm local time.

Toofan Harirod on the other hand, first played against Simorgh Alaborz in the 4th group stage match and defeated its rival with 1 – 0 result. The team later defeated De Mainwand Atalan in the sixth group stage match of APL with 3 – 0. Finally, in its last group stage match, the team had an aggregate 3 – 0 victory over Oqaban Hindukosh and with a total of 9 points, the team escalated to the semi-finals.

“Following the match, we played against Oqaban Hindukosh, we had three days to rest but meanwhile we carried our exercises in order for our players to be ready. Our formation for the game today will be the usual 4 – 4 – 2 formations, but previously against Oqaban Hindukosh we used our reserved players mostly whilst in today’s game we will go with our main players mostly, and, we have no injured or expelled player.” Said Hameed Massoudi, the coach of Toofan Harirod. He further added: “Our opponent team is a good team, so far in order for qualifying for the semi-finals, they have been playing very well, it is a competent team. However, it is not easy to predict a football game, I can’t exactly tell if how this game might be, the team which takes advantage of the opportunities will win.”

“De Abasin Sape is well prepared, currently all our players are quarantined, and they will play a good, exciting and very thrilling game tonight in order to prove that it’s still the team which escalated to the semi-final and it is now trying to reach the final game. Our formation has usually been 4 – 4 – 2 but we have always incorporated changes, we have been playing 4 – 2 – 3 – 1 as well as 4 – 1 – 4 – 1, and we might keep bringing changes as per the need. All our players are healthy and well-prepared.” Said Mr. Elias Manochehr, coach of De Abasin Sape. He added: “Toofan Harirod is a powerful team, it has made great investments and owns many national team players, but we will try to defeat our opponent and be the winner.”