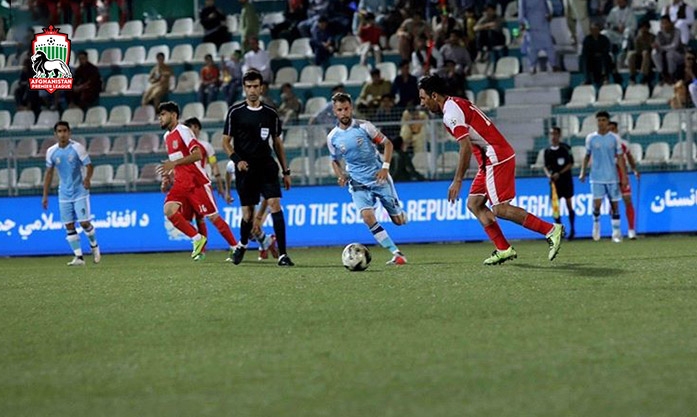 In the 9th match of group stage competitions of APL, season 8, Toofan Harirod had a tremendous victory against their strong rival De Maiwand Atalan.

Although It was not a decisive match, still it was an exciting match for the fans of both teams. Toofan Harirod has already won both of their last games against Simorgh Alborz and Mawjhai Amu, already booking a spot in the semifinals. While De Maiwand Atalan drew their first game against Mawjhai Amu with a score of 1-1 and faced a massive loss of 4-0 against Simorgh Alborz, Therefore, they do not have any chance to stay alive in the tournament.

Toofan Harirod started the game offensively, but unfortunately, Nasir Farahi scored an own goal and gave the opponent 1-0 lead. Toofan Harirod did not lose control of the game and created many opportunities on the Maiwand’s goal. Finally, the captain, Maroof Muhammadi scored the equalizer in the 27th minute, and it was not the end, and right ahead of the first half whistle, Farhad Adil score the leading goal, and they finished the first half strong.

De Maiwand Atalan started the 2nd half much better and took the possession of the ball, and created severe threats on the opponent’s goal but could finish them well. Moreover, once again, Haseebullah Ahadi scored for Toofan Harirod in the 76th minute in a brilliant counter-attack and made it almost impossible for De Maiwand Atalan to bounce back.

The game turned to an exhilarating battle, as Maiwand Atalan had nothing to lose and they gave everything to attack Toofan Harirod, but it seemed like it was not their night at all.

The unstoppable Toofan Harirod received a penalty kick for the mistake of Maiwand’s defense in the penalty area, and it was Rahmatullah Khairkhwah who turned it into goal in the 94th minute.

An absolute sensational game came to an end with a score of 4-1 for Toofan Harirod, and Rahmatullah Ahadi was chosen as man of the match for his best performance and a brilliant goal.