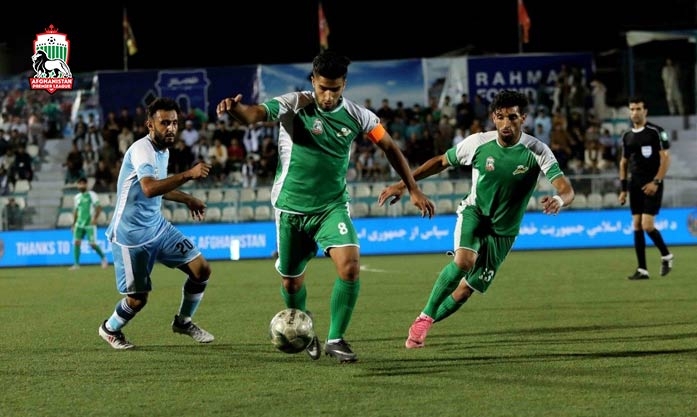 Toofan Harirod is into the finals, beating De Spinghar Bazan by 2-0

In the 1st semi-final match of APL, season 8, 2019, the champion Toofan Harirod went head to head with De Spinghar Bazan in an exciting football match. It was a do or die match for both sides because the winner qualified for finals and the loser got eliminated.

The game started with charm and excitement, and both teams came into the ground with strong spirits and high motivation of winning the game and heading to finals.

Toofan Harirod had the upper hand, started the game strikingly, and took charge of the game. On the other hand, De Spinghar Bazan tied hard to defend their goal, but finally, Toofan Harirod’s efforts paid off, and in the 18th minute of the first half, Maroof Muhammadi scored a significant opener from the penalty spot.

De Spinghar Bazan’s players did not lose their motive and were committed to staying in the game, and with brilliant teamwork, they created few excellent chances on the opponent’s goal, but the luck was not with them, and they failed to finish them on the target.

The game continued with 1-0 till the 45th minute of the first half, but once again, Maroof Muhammadi changed the scorecard with a stunning goal with a freekick shoot from the outside of the 30-yard circle, giving a strong lead to his team by 2-0 in the first half.

Both sides returned to the field after a 15-minute break between the two halves. In football, the second half is called the coaches half; everyone is eager to see what they have to roll on the table.

De Spinghar Bazan started the 2nd half better than their first, keeping the control of the game with them, trying to compensate the goals they found in the first 45 minutes of the game.

The 2nd half was a fascinating and prodigious, the crowd enjoyed it, and it had everything except any goal. The game ended with the same score of the first half for Toofan Harirod.

In the result, Toofan Harirod qualified to the finals, and De Spinghar Bazan got eliminated from the tournament.

Maroof Muhammadi was selected as man of the match for his brilliant skills and scoring two goals.