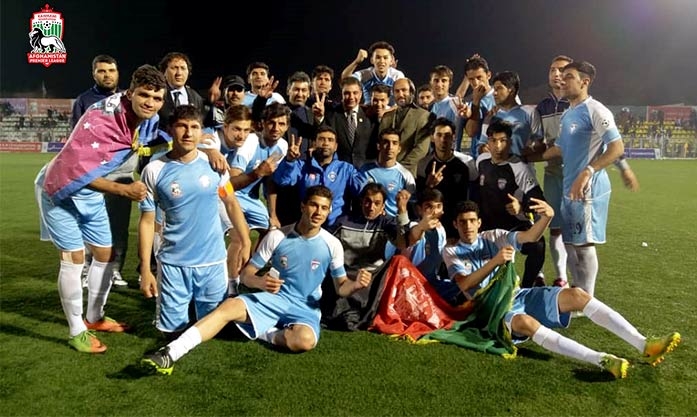 The Afghanistan football federation hosted the final match of RFAPL 2018, today, 25th October 2018, at 06:00 pm. Two finalists, representative of the west zone and the men in gold from the capital went head to head in this thrilling match.

As soon as the game was kicked off by Toofan Harirod, Shaheen Asmayee penetrated the network of their opponents and by properly intercepting their passes, the team carried the game with its usual striking attitude. However, Toofan Harirod returned the errand by fashioning very systematic counter attacks.

The players of both team had a high spirit and played very well. The strikers, defendants and the overall coordination between the players was marvelous but despite all the breath taking incidents throughout the first 45 minutes, the half ended with 0 – 0 result.

Shaheen Asmayee started threatening their opponent’s right after kicking the second half, and followed the trajectory with certain other meaningless strikes which were once again transformed to counter attacks by Toofan Harirod but their shots were weak and pointless.

Toofan Harirod was awarded a penalty kick due to a foul by Amanullah Sardari on the 76th minute of the game but Rahmatullah Khairkhwah missed the exquisite opportunity by an ignorant shot. The team maximized their efforts exponentially over their powerful rival’s goal but the 90 minutes of the game were due and the teams were destined to play for extra 30 minutes.

Toofan Harirod was surely committed to make a difference and entered the field with a very high morale and occupied the field with nonstop efforts which paid off on the 102nd minute and Rahmatullah Khairkhwah fixed the damage he had caused by scoring the deserved goal of his team.

Shaheen Asmayee fought to the very best possible extent but was unfortunate to fashion any proper strike, whilst Toofan Harirod picked a defense mode and brought both half’s of the extra minutes with two of their players expelled by red cards, to end over the 1-0 result.

The mascot of the powerful defendant of the championship title got smashed by Toofan Harirod after five years in the RFAPL 2018.

Rauf Qaderi was awarded as the man of the match. Based on the statistics, both teams had equal possession of the ground.