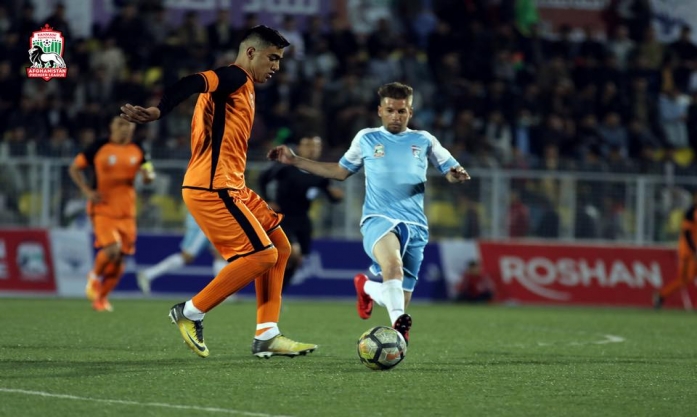 The rivals from the group stage of last year who ended with a 1 – 1 draw competed once again in the 4th group stage match of APL 2018 Rahmani foundation today, 10th October 2018, 06:00 pm at the Football federation of Afghanistan.

Previously in the APL 2018 Rahmani foundation, 6 teams, 4 from the group “A” and 2 teams from the group “B” competed against each other. Today, the next two teams lined up for a battle which ended with 1 – 0 result for Toofan Harirod.

Simorgh kicked off the match quite clearly with a striking attitude, demonstrating dominance through a good network as well as interception of the passes between their opponents and the first unsuccessful two shots toward the right gate were hit by Simorgh which were quickly recompensed by counter-attacks from Toofan Harirod.

Both teams kept threatening the goals of each other equally for the first 45 minutes and even though it was a very rapid game, strikes were situated and shots were hit toward both goals, none could make use of the opportunities.

Hekmatullah Muradi’s goal was threatened more in the last minutes of the game but he did not lose himself and saved many dangerous goal shots. As both teams were apparently reluctant regarding the result which was quite identical to that of the last year game; the first half ended with 0 – 0 result.

Players from both team were more serious in the second half but the incidents were almost the same for the next 20 minutes until Rahmatullah Khaikhwah from Toofan Harirod finally broke the lock securing the door of their opponent’s through a powerful and precise free-kick shot.

The rest of the second half was more deficient of thrilling moments, players from both teams started to act individually while Simorgh was even more under pressure, endeavoring to eliminate the threats and concerned about its defense line, took benefit out of the counter attacks only but they were unfortunate to bring a change in the score and the referee whistled full time over the 1 – 0 result.

Farzad Atayee & Faisal Hamidi from Toofan, and Nasim Muradi, Nik Qadam Ahmad from Simorgh received yellow cards. Toofan had 55 percent possession of the game. Rahmatullah Khairkhwah was awarded as the “Man of the match.”