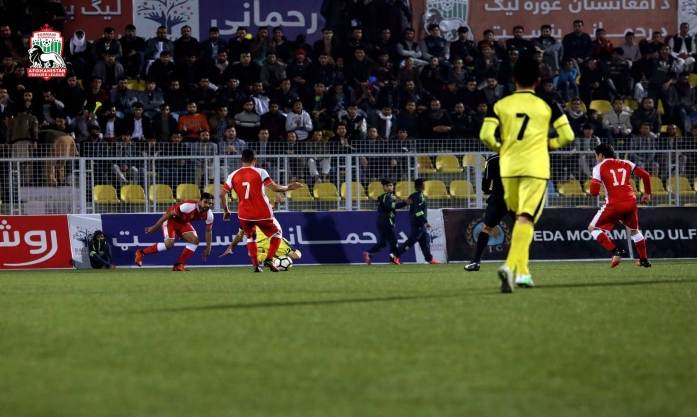 The first exhilarating semi-finals match of the 2018 Rahmani Foundation Afghan Premier league (RFAPL) took place between the two finalist rivals of last year, Shaheen Asmayee and De Maiwand Atalan, today, 22nd October 2018, at 06:00 pm in the football federation of Afghanistan which ended with 1 – 0 result for the title holders.

Continuing to dominate possession in the first-stoppage, Shaheen Asmayee started the pitch with confidence to score any early goal, yet most of their fashioned strikers failed to trigger an early first-half lead as the fans expected. On the other hand, Atalan took advantage of only few counter attacks, which were, comparatively speaking, very serious but were deterred exquisitely by Kawash Haidari.

Both teams equally made efforts over their opponents goal but the game wasn’t in favor of any of the rivals and the first half ended with 0 – 0 result.

The second half of the game was quite indistinguishable with the first, both teams equally threatened each other’s goals with direct attacks as well as counter-attacks but could not take benefit of the opportunities.

All the way in the 90th minute of the game, as it seemed that the crowd is frustrated by the steady rhythm of the game with 0 – 0 result, Mustafa Afshar from Shaheen Asmayee caused a change in the match result and put his team into a not so early lead.

Shocked by the very sudden and last minute’s definitive goal, De Maiwand Atalan maximized its efforts exponentially over their opponent’s goal but the referee whistled for the full time over Shaheen Asmayee’s pitch.

De Maiwand Atalan was unfortunate to deter their history, and yet once again, conceded the game to its powerful finalist rival with 1 – 0 result.

Shaheen Asmayee will now play in the final game against either of the A2 or B1 teams, De Abasin Sape and Toofan Harirod who will play tomorrow, 23rd October 2018, at 05:30 pm, in the Afghanistan football federation stadium.