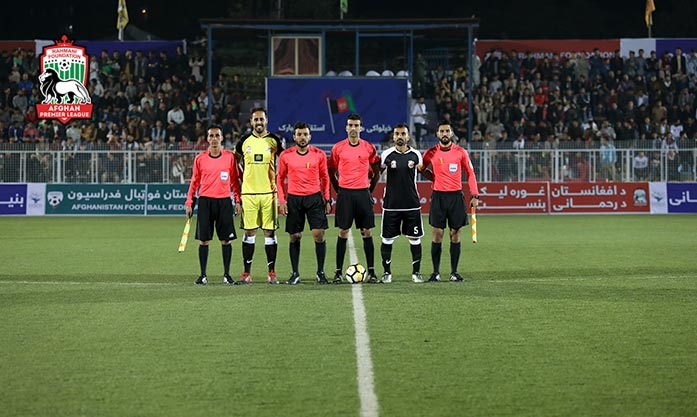 The match between Shaheen Asmayee and Mawjhai Amu started with great excitement and cheering of the crowd in the Football federation stadium following the amazing inauguration ceremony today, 7th October 2018, at 05:30 PM.

Shaheen Started the game with vibrant dominance over its opponent which previously had a record of conceding the game to the 2017 title holders. After some rapid passes in the initial moments, the game turned slow and thorough by the fifth minute. However, Shaheen was still not up for missing any of the opportunities.

Mawjhai Amu on the other hand was only taking benefit out of the counter strikes than situating direct attacks, whereas, it was quite obvious that they did not enter the field with so much concentration on defense but it seemed that they were choice-less against their powerful rival.

At certain points in the mid time of the first half, both teams turned into a very close battle and had equal possession over the ball and control on their opponents ground. Both teams had various chances and situated several attacks, however, Shaheen threatened Mawjha more and so they only had a chance to use the counter attacks as means for proving their abilities.

Although it seemed that Shaheen had more possession of the ball in the first half, but Mawjha didn’t do poor either and the first half ended with 0 – 0 draw result.

The second half begun with constant strikes of Shaheen Asmayee. It didn’t took Shaheen long to prove their dominance over their opponent in the second half; Hussain Alizada scored a goal through a precise delivery of his co-player at the 52nd minute of the second half. With more strikes following their first goal, it seemed that Shaheen is trying to take good advantage of their ascendancy.

Shaheen kept invading their opponent’s space throughout the second half and Fardin Hakimi, scored the second goal at 77th minute of the game, making it roughly hard for Mawjhai Amu to re-compensate the burden and the game ended with certain week strikes of Amu resulting no positive outcome and Shaheen Cheered their 2 – 0 victory in the initial appearance in APL 2018.