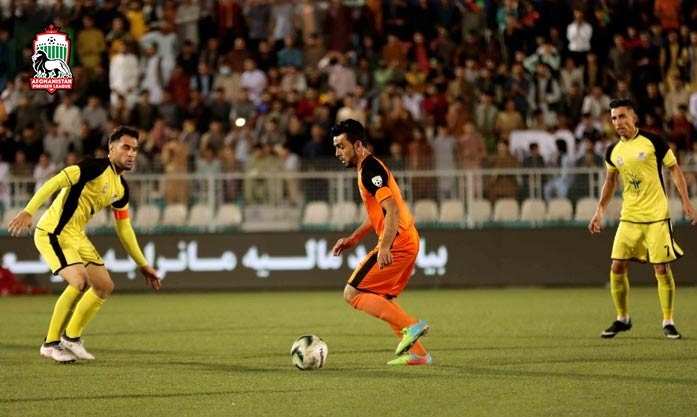 The game started with great excitement, with both teams in strong spirits and aiming for the win. The first half of the match began stormy and violent, and in the result, in the 10th minute, Asmayee's defender Fardin Hakimi received a yellow card for a foul on Simorgh Alborz players. On the other hand, the players of Simorgh Alborz used all their energy and dynamism to repel the attacks of Shaheen Asmayee, but Shaheen Asmayee intensified the pressure of the game, and in the 34th minute Raof Qader, scored the opener due to an unfortunate mistake of Simorgh’s defense line.

Simorgh Alborz players tried hard to compensate the goal for leveling the scorecard and created several opportunities on the Shaheen's goal, but the skilled goalkeeper of the Shaheen Asmayee, Kavash Haidari, managed to keep his goal closed. The Simorgh Alborz players were able to maintain the game for just 10 minutes and once again, in the 46th minute, Raoof Qaderi scored for the second time in a great counter-attack, changing the scorecard 2-0 in favor of Shaheen Asmayee.

Raoof Qaderi, the shining star of the Shaheen Asmayee team, was unstoppable, completing his hat-trick in the 48th minute, giving a 3-0 lead to his team at the end of the first half.

The second half began with all seriousness and sensitivity. Simorgh Alborz team was in a bad situation; they needed three goals for a draw and four goals to win the game, and they had to protect their goal as well. On the other hand, Shaheen Asmayee, with the advantage of the first half, had the overall control of the game. The lead was 100 percent when Mustafa Afshar scored two goals in the 72nd and 90th minute.

The game ended 5-0 for Shaheen Asmayee, and Simorgh Alborz failed to reach the final.

Raoof Qaderi was awarded ‘Man of the Match’ title for a fantastic performance and a Hat-trick.