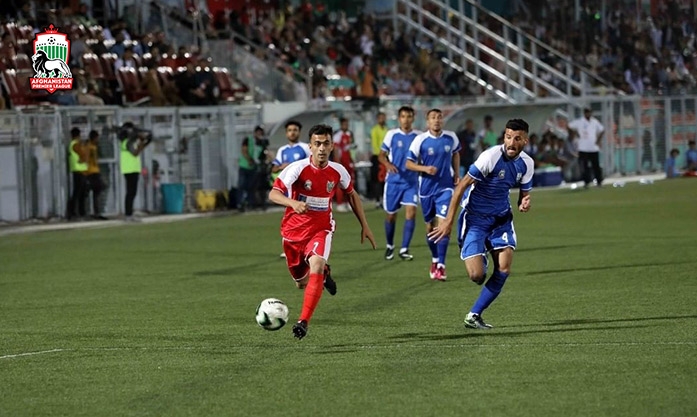 A resounding victory for Simorgh Alborz, A crushing defeat for De Maiwand Atalan

In the 3rd match of the second week of group stage competitions of APL, season 8, Simorgh Alborz had a great and important victory against the strong team of De Maiwand Atalan.

It was a sensational game for both teams, as Simorgh Alborz had faced a defeat against Toofan Harirod in their first match of the group stage, while De Maiwand Atalan drew their first game against Mawjhai Amu with score of 1-1. Therefore, it was a must-win game for the teams to get 3 points for securing a good spot in the group, as well as qualification for the next round.

Simorgh Alborz started the game offensively and took the charge in the 11th minute of the game with a stunning goal of Nematullah Karimi. De Maiwand Atalan could not bounce back because of their weak performance and lack of motivation and ended the half with the same result.

De Maiwand Atalan began the 2nd half with the same passion and strategy and only could create few chances which they failed to get benefit from. On the other hand, Simorgh Alborz seemed to be more focused and motivated than the first half and kept the match with the same result until the 80th minute. Finally, it was Farhad Sawgand, who changed the scorecard to 2-0 and made it harder for Atalan to come back to the match.

Simorgh did not count it enough and Farhad Sawgand scored his 2nd and Simorgh’s 3rd goal in the 87th minute of the match.

This ‘UNSTOPPABLE’ rhythm goes on for Simorgh Alborz when Lutfullah Ibrahimi scored the 4th goal before the final whistle.

An absolute sensational game came to an end with a score of 4-0 for Simorgh Alborz and Nematullah Karimi was chosen as man of the match for his best performance and a brilliant goal.