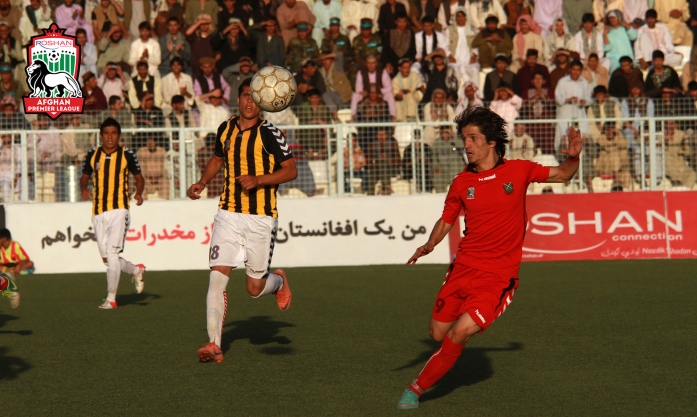 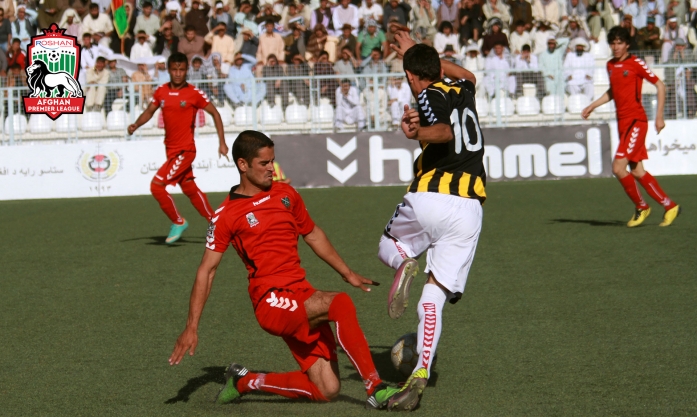 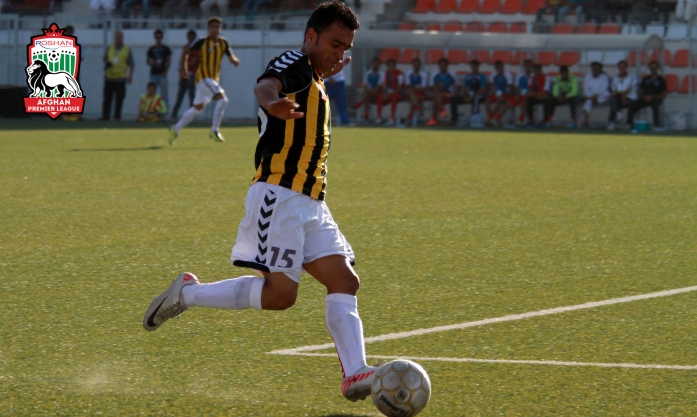 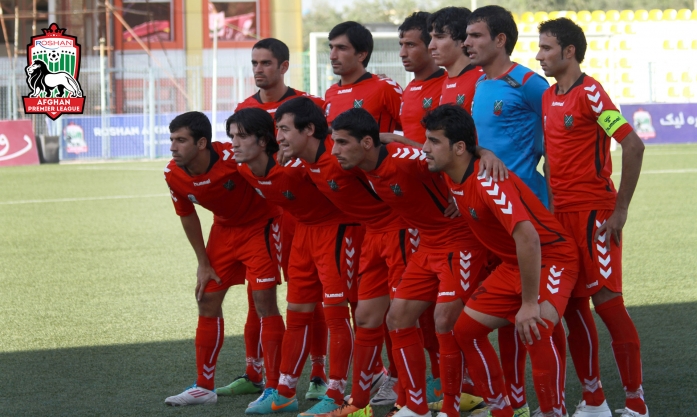 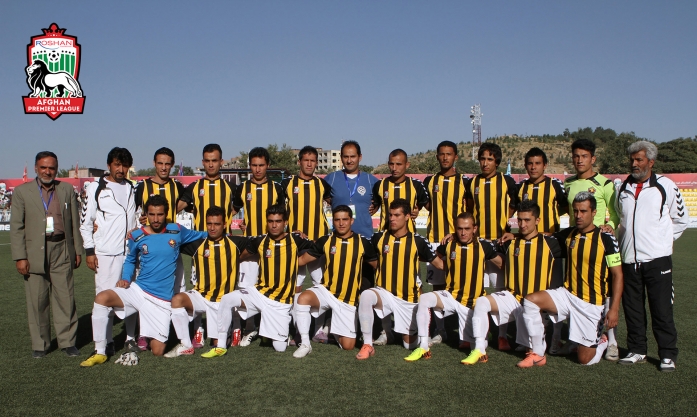 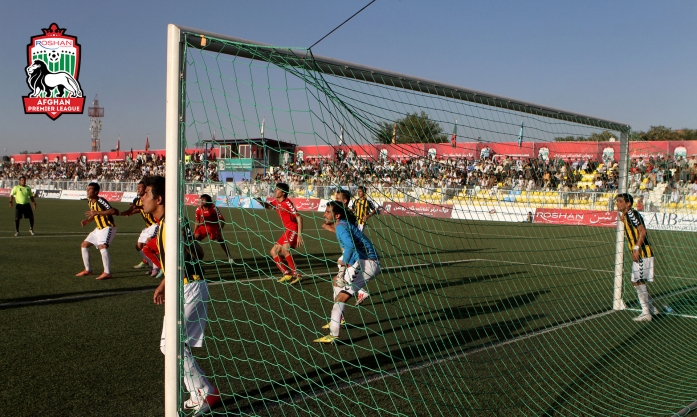 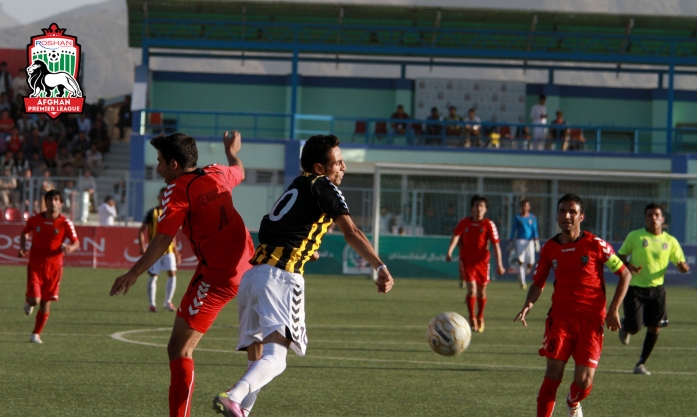 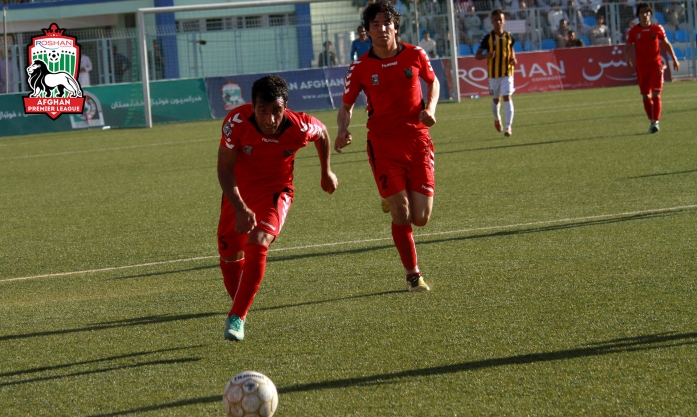 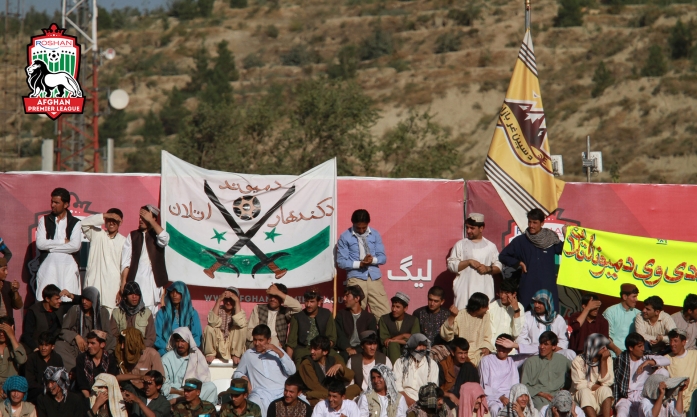 Having lost their first match 2-0 to the Southeast’s De Abasin Sape, De Maiwand Atalan needed a win or their playoff chances were over.  For Oqaban Hindukosh, on the other hand, today’s match was technically their first of the 2013 RAPL season.  They previously lost 3-1 to Kabul’s Shaheen Asmayee, but the game must be replayed due to participation by ineligible players.

The first 15 minutes of the game were encouraging for De Maiwand Atalan.  Led by left-footed forward Faiz Mohammad Faizi (#9), who had the pace to chase down a series of diagonal balls from his midfield, southern Afghanistan’s attack looked threatening around the Oqaban Hindukosh goal.  However, they were not able to put any chances in the back of the net.

Oqaban Hindukosh made them pay in the 19th minute when a long cross from the right flank found a streaking Jamshid Mohammadi (#14) at the far post.  He outran the De Maiwand Atalan backline and had plenty of space to head the ball home, putting his team up 1-0.

A little over ten minutes later, the referee awarded Oqaban Hindukosh a penalty kick after De Maiwand Atalan’s goalkeeper Abdul Qayoom Hayand (#21) pulled down forward Kazim Hashimi (#15) in a scramble for the ball.  De Maiwand Atalan was vehement in disputing the call, earning a couple yellow cards in the process.  But the commotion did not affect Mohammad Anwar Akbari (#11), who converted the PK for Oqaban Hindukosh by inducing Hayand to dive left while he passed the ball into the opposite side of the goal.

De Maiwand Atalan looked flustered and disorganized for the rest of the half.  Still, Faizi got his side back into the game in a moment of inspiration in the second minute of first-half stoppage time.  Collecting a pass from central midfielder Asadullah Razai (#3) at the top of the box, Faizi took a touch that sat up nicely for a left footed blast toward the upper right corner of the goal.  Oqaban Hindukosh’s goalkeeper Ali Jubair Lali (#1) managed to get a few fingers on the shot, but it was not enough.

The second half saw a lot of action for many of the wrong reasons.  Both sides pressed aggressively in an attempt to convert a decisive goal, the result of which was an exciting back-and-forth series of counter attacks that kept the fans engaged.  But despite plenty of fouls, neither team was able to score.

In the 85th minute, tempers finally boiled over.  Following a routine foul at the top of the De Maiwand Atalan box, the De Maiwand Atalan players initiated an argument that got physical and ended in the ejection of three of them: Hayand, Faizi, and defender Mohammad Younis (#4).  The referee smartly called the game a few minutes early, meaning that Oqaban Hindukosh took home three points.

The victory is a great boost for Oqaban Hindukosh, who are slated to face undefeated De Abasin Sape next Thursday. De Maiwand Atalan, on the other hand, will look back at the game and wonder what could have been had they maintained their composure in the closing minutes.