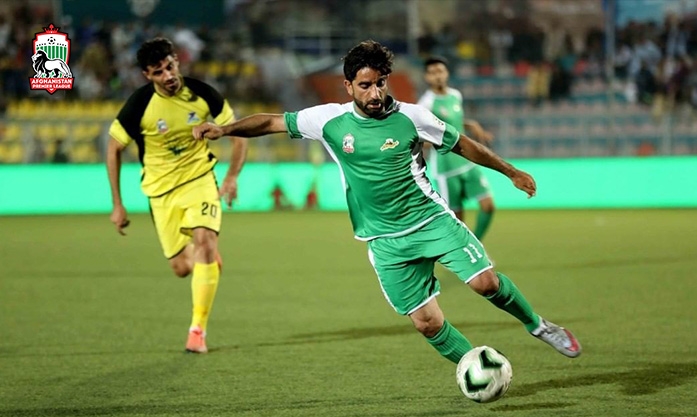 Shaheen Asmayee, the most famous team of the tournament, faced the young and talented team of De Spinghar Bazan, in the 2nd week of group stage competition of APL, 2019.

Both teams started the match with passion, putting serious pressure on each other, trying to take charge of the game in the hand. Shaheen Asmayee missed many opportunities in the early minutes of the game and their efforts did not pay off until the last minutes of the first half. On the other hand, presenting a beautiful show to the audience, De Spinghar Bazan broke the mark and led the game by 1-0, in just 12th minute, when Farshid Wojodi scored a stunner.

Everyone was quite sure about the win of De Spinghar Bazan in the first half until Raoof Qaderi scored the equalizer in the very last minute of the game and made it easy for his team to come back in the 2nd half. The 1st half score was one all.

The 2nd half started with early changes in the field’s lineup for both teams, expectations of the spectators were high from both sides. De Spinghar Bazan started defensively, but Shaheen Asmayee’s players were looking more motivated for the goal, failed to score in many easy opportunities. The score was 1-1 for both teams in the extra minutes of the game, but as they say, “Football is the game of

seconds”, once again, Raoof Qaderi kicked the ball in the net just before the whistle of the 2nd half and changed the course of the game in favor of Shaheen Asmayee by 2-1.

And of course, the man of the match title was awarded to Raoof Qaderi for his 2 beautiful goals for Shaheen Asmayee.