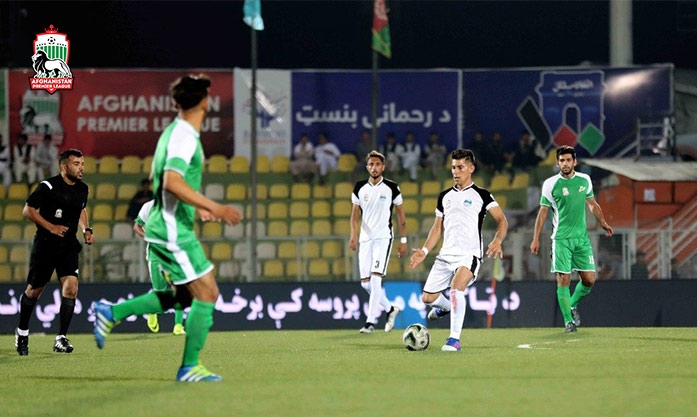 On the last day of the first week of the group stage competitions of the 8th season of the APL, De Spinghar Bazan, the 4th season’s champion of the Afghan Premier League and the De Abasin Sape competed.

The first half of the game started with back to back attacks of De Abasin Sape, which resulted in a 1-0 win for Abasin Sape in the 9th minute of the match with a beautiful goal of Sayed Jalal Hosseini. On the other hand, De Spinghar Bazan finished the first half with a combination of defensive and attacking game without scoring any goal.

The second half started with a great performance by the players of De Spinghar Bazan, and De Abasin’s player received a yellow card for his foul on opponent’s player in the early minutes of the second half. Immediately, it was Farshid Wojodi who scored a beautiful goal and drew the score 1-1 in the 70th minute. De Spinghar Bazan's team equalized the match and with high motivation continued their best performance and Atiqullah Soltani scored the second goal in the 84th minute giving lead of 2-1 to his team. Then, with spectacular goals by Noman Walizada and Rashid Azizi in the 90th and 93rd minutes, the game finished 4-1 in favor of De Spinghar Bazan.

Ultimately, Atiqullah Sultani was recognized as the best player on the pitch for his great performance.