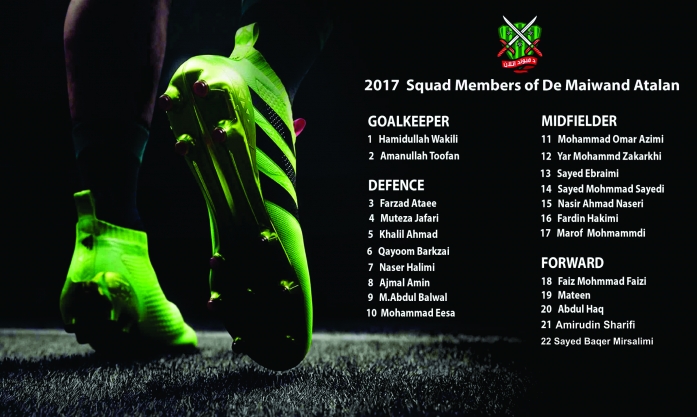 The 2017 APL regional tournament (Road to APL) in the Southwest region of Afghanistan took place from May 10th to May 14th, 2017 in Kandahar city. De Maiwand Atalan represents Kandahar, Nimroz, Zabul, Urozgan, and Helmand provinces.

The five teams that competed in this tournament were each Kandahar “A”, Kandahar “B”, Helmand, Urozgan, and Zabul. All the matches kicked-off at the historic Ahmad Shahi stadium of Kandahar city.

This regional tournament hosted an exciting round of tryout matches judged by AFF licensed coaches and expert officials. The judges and officials put their best to select the top 22 players for the Atalan’s 2017 squad.

Prosperously, Helmand outperformed other four teams to claim the championship of 2017 APL southwest regional tournament and Kandahar “B” came as the runners-up. Sayed Baqer Mir Salemi received the Best Player of Tournament Award, Amanullah Toofan entitled to the Best Goalkeeper Award, and the Fair Play award went to Kandahar “A”.

De Maiwand Atalan’s 2016 performance in the main event was brilliant, following a closely contested affair game Atalan competed against Shaheen Asmayee in the 2016 APL final. Yet, the team could not prevent a 2-1 defeat against Shaheen. The team is keen to etch their name on the 2017 APL cup this year.