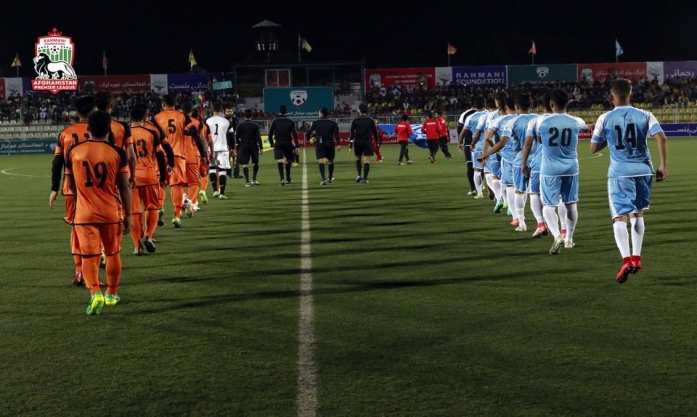 Battle for the semi-final’s ticket

Shaheen Asmayee from group “A” escalated to the semi-finals last night after the match with De Spinghar Bazan, with 3 more points and a total of 9, no loss in the group stage, whilst their rival, Bazan is annihilated.

Today, 16th October 2018, the second team in group “B”, De Maiwand Atalan, representative of south west zone and runner up of APL 2017 will face the representative of north zone, Simorgh Alborz. This is the 10th group stage match of APL 2018 Rahmani foundation, 5th match of the group A, and 3rd group stage match for both teams which will be played at the Football federation of Afghanistan.

De Maiwand Atalan has been the runner up for two consecutive years but appeared too weak in their second match, 6th group stage match of APL 2018 Rahmani foundation, against Toofan Harirod which is, with 6 points, currently on the top of group “B” table. However, their first match, 2nd group stage match against Oqaban Hindukosh was not bad and the team won the game with 2 – 0 result.

Simorgh Alborz, on the other hand, is also once defeated by Toofan Harirod with 1 – 0 result, but later on, the team had a 3 – 1 victory over Oqaban Hindukosh, which, as said, was previously defeated by De Maiwand Atalan too and has accumulated no points in the group “B”, whilst its rivals in the list, Toofan Harirod, De Maiwand Atalan and Simorgh Alborz, respectively own 6, 3, 3, points, so to say, the team is already annihilated.

Although nothing can be much predictable in such critical stages, but both teams are very serious about the game, however, De Maiwand Atalan is more concerned about its reputation and the track they have followed for two consecutive years, compared to Simorgh Alborz which hasn’t gone further than the third position in the past two years, whilst, currently the team happens to be ahead of De Maiwand Atalan with one goal difference, so De Maiwand Atalan can only escalate to the semi-finals with at least 1 – 0 win. After all, immense changes have been made in the formation of all eight teams and the previous designations are not binding anymore.