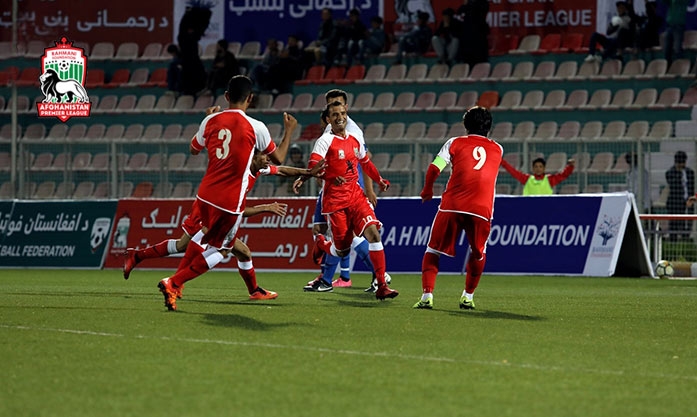 As for a welcome match both teams were endeavoring to take the lead and started the game with a spirit to cheer up their fans to the very possible extent; good passes were exchanged among both teams, each one situated certain attacks and not very precise shots were hit over their opponents goal. But, the rhythm of the game turned slower shortly.

Until the 30th minute, the game was still slow but on the 31st minute and all of a sudden, through an accurate pass of Faiz Mohammad Faizy, Abdul Wahed Noorzai, the striker of De Maiwand Atalan scored a goal, putting De Maiwand, the runner up’s of previous year at a not so early lead in the game.

As of this opportunity ceased by Atalan, Oqaban forced out their assault line and through exchanging several rapid passes and situating stirkes over and over, all the pending minutes of the first half were pretty serious as De Maiwand Atalan on the other started talking more serious benefits out of the counter strikes. The first half ended with the 1 – 0 result.

Second half was kicked off by Atalan with even more concentration over assaults and back to back strikes were made on the very first minutes which did pay off and Abdul Wahed Noorzai scored his second goal on the 47th minute, making the game more thrilling as Oqaban started taking no chances anymore, whilst they still had to take into account the counter strikes.

De Maiwand Atalan kept turning the game slower in the midpoints of the second half and chose a defense attitude, however they still kept taking advantage of the counter strikes but they missed few great opportunities over their opponent’s goal.

Oqaban kept trying but could not make any changes in the result. The game ended with 2 – 0 result.